Immerse yourself in swish Bath Avenue three-bed for €975k

Property in hip area of Dublin extends to 1,625sq ft and is in walk-in condition 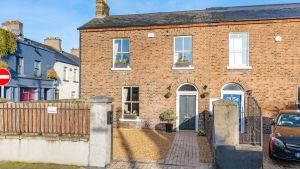 Bath Avenue in recent times has become one of Dublin’s hippest locations to live. Within walking distance to the city, the area is full of young workers with Facebook, Google and Airbnb and a number of pubs and cool eateries have opened to cater for the new demographic. On match days, the area comes alive with the buzz from throngs of rugby and soccer fans heading to and from the Aviva Stadium.

Number 16, which lies at the end of the terrace and next door to the Old Spot gastropub, was purchased by its current owners in 2004. “It was an auction and there were only three bidders; ourselves and two builders. It was in an awful state, but as we are both engineers we knew the potential it had despite what it looked like,” say the owners who are now moving to a larger home in Sandymount village.

They admit the project was a complete labour of love and the couple spent months staying with friends while the property underwent renovation. “It was so bad we only managed to retain one of the original doors, and the old floors were replaced with new solid walnut in the living areas and hallway and laid marble in the kitchen.

The Siematic kitchen, which lies in an extension to the rear of the property, feels brand new despite being almost 20 years old and includes high-end Miele and Neff appliances. Underfloor heating provides warmth beneath the solid marble flooring, and all the light fittings are connected to the Lutron Smart Lighting system.

A large sliding door opens from the kitchen to the rear garden which has been given a recent overhaul by Ross Farrell of Greenstone Landscapes. “It’s a really great space and we have sat out there until October, as it’s a suntrap and completely private.” From here there is access to a rear lane “which is great as we cycle to work and can store our bikes out the back safely”.

Three bedrooms are arranged on the two upper floors. The principal, on the first floor, has views to the Gasworks and is generous in size as is its en suite. The second bedroom on this floor has a Jack and Jill bathroom and retains the original fireplace from the livingroom downstairs.

A further flight of stairs leads to another large bedroom, which is also en suite. There is also storage in the eaves at this level, which has an internal height of about 1.5m (5ft), so it allows easy access for storing suitcases and sports gear.