Grandeur with magical gardens on Blackrock terrace for €2.75m 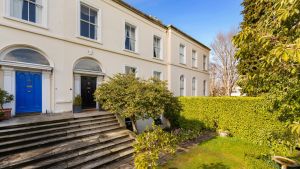 It’s hard to pick the best feature of 2 Avoca Terrace in Blackrock, as this is a property that ticks a lot of boxes.

Set in a terrace of just four houses, at the junction of Avoca Road and Avoca Avenue, the internal space and proportions are remarkable. From the wide entrance hallway to the 14ft high ceilings in the reception rooms at hall level, everything about this property just screams pure grandeur.

The terrace would have been home to the well-heeled when constructed in 1850, and little it seems has changed today.

Even the off-street parking for the property is worth noting. Accessed through private electric gates alongside Number 4, a terrace of coach house properties known as Flann O’Brien Mews (the pen name of novelist, playwright and satirist Brian O’Nolan who lived at Number 4) lines a cobbled private avenue which has ample parking for four cars behind the house itself.

Just inside the parking area a small gate leads into a rather magical rear garden.

Set out on different levels, with most plants and trees on the cusp of bloom, the garden, like the house, has been painstakingly tended to over the years.

A terrace of coach house properties, Flann O’Brien Mews, take their name from the pen name of novelist, playwright and satirist Brian O’Nolan who lived at Number 4

Neat box hedging frames apple and cherry trees, that lead along a meandering path to a smaller kitchen plot where rhubarb, gooseberries and a plethora of herbs will happily supply a good-sized family.

Clematis is used abundantly; covering a stairwell from the office on the first return – which allows access to the garden via French doors, along the old granite walls themselves, and also on an archway that creates a natural divide between an al fresco flagstone dining area and the rest of the garden.

It is a pity that the promotional photographs don’t depict the garden in bloom, but anyone who knows their plants and trees can just imagine what it will be like at the height of summer flowering.

The kitchen at garden level has a new large glazed section, in the form of French windows with a Georgian-style fanlight that brings in lots of lovely light and garden views.

There are also some nice contemporary touches to this period home. The old coal hole has been opened up and is now a wine cave, and where the old well was located in the garden, there is now a barbeque area.

The two reception rooms situated off a very spacious hallway just inside the granite steps, are another wow factor of the house. The photographs let it down slightly because, in reality, these are very fine room with lovely proportions.

Both have matching period fireplaces overlooked by intricate coving, and you can just picture the setting here at Christmas, with roaring fires and room for a large extended family.

As you would expect, the principal bedroom is of vast proportions, complete with a walk-in wardrobe and good-sized en suite. Views through the two full-height sash windows are of the small park across the road, which offers a green space for local children to kick footballs around.

The property has a further four bedrooms, three of which are good-sized doubles and a smaller room which could be converted to an en suite.

Novelist Flann O’ Brien once said, “Moderation, we find, is an extremely difficult thing to get in this country.” Perhaps this is because he grew up at the last house on the terrace, where the equally spacious interiors are anything but moderate.

Number 2, extending to 380sq m (4,090sq ft) and in turnkey condition, has been launched on the market through Knight Frank seeking €2.75 million.