Graceful living on Grosvenor in Dublin 6 for €1.1m 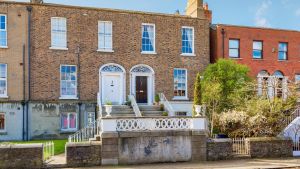 A couple who work in technology, and their baby daughter, live at 32 Grosvenor Road, a quiet street in busy Rathmines. The pair bought the Victorian house in 2012 for €780,000 and had little to do after they moved in.

“The previous seller took us through the work he had done when he renovated the property. All the sash windows and shutters were repaired as were the ceiling roses: his attention to detail was meticulous. All we had to do was paint the house in our own choice of colours,” says the owner.

The same will apply for new owners, as the two-storey-over-garden-level house is in turnkey condition.

At hall level are two fine formal reception rooms with original floors. The drawing room has a particularly interesting white marble fireplace and is flooded with light due to its southerly aspect.

At garden level – where the family spends most of its time – is a large kitchen-living room with an open fireplace and French doors to the low-maintenance rear garden.

Though not large and laid out with sandstone, bamboo and Acers, there are parks and playgrounds nearby. The garden has a rear gate which opens on to Leicester Avenue, which is ideal for children’s buggies and going to the Church of the Three Patrons which is opposite. “It was great when we Christened our daughter – we had a party in the garden. People just popped across the road from the church into the garden,” says the owner.

The house has three bedrooms, two of which are significantly large – the one overlooking the rear garden is en suite.

On the second return is a bright family bathroom with views to the Dublin Mountains.

The family wish to move closer to the sea and have placed their 192sq m (2,066sq ft) home on the market through Hunters Estate Agent for €1.1 million.