Double-fronted house dating from about 1830 is up-to-date, with first-class fittings 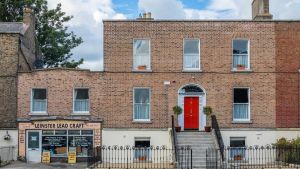 Within a minute’s walk of the soon-to-open D7 Luas line, this Georgian double-fronted property dates from circa 1830 and has been brought bang up to date with a refurbishment that includes first-class bathrooms and a contemporary eat-in kitchen.

For more than 70 years it was home to a seamstress who reputedly made the wedding dress of founding father Éamon de Valera’s first born, Emer, mother of Éamon Ó Cuív, Fianna Fáil spokesperson on Regional Development, Rural Affairs and the Gaeltacht. She passed away in 2012.

When the current owners bought the house, the seamstress had passed away a couple of years before and the house need a good deal of work, the couple recall, speaking from their new home in Spain.

He was born in Cabra West and as a boy he had cycled past the fine two-storey over basement property on his was to school at St Laurence O’Toole’s on Seville Place.  “One day I’m going to own that”, was a promise he made to himself; one that came true in 2009.

One of a pair of houses that pre-dates anything else on the street, the property extends over a shop that isn’t part of the premises.

The couple had previous renovation and that, paired with the advice of an architect, extended out into the back yard, adding about 40 metres of space into which they installed a decent utility room and first-class spacious bathrooms.

A set of granite steps and wrought iron railing leads up to the fan-lit front door, which opens into a good-size hall with a fine dual aspect, formal sitting room to the right. The room has a lovely grey marble fireplace and original timber boards cobbled together from the best boards in each room to create a sense of continuity with the hall.

To the left is the kitchen housed in one of the original good rooms, with its cornicing and shutters all on show. Also dual aspect, it features a Miele kitchen and a snazzy extractor with a remote lighting system that can change colour to suit the mood. The room is designed simply, with a bank of units against a wall and steps leading down to the utility. As a room, it truly is at the heart of this house and is where the owners love to entertain within sizzling distance of the action.

Concealed behind the kitchen island is a fireplace that matches the one in the sitting room and could, should the next owner prefer to reconfigure the premises, be put back on show.

On the far side a step leads up to a second living room; also dual aspect.

On the return upstairs is the family bathroom, a large room with a separate bath and shower and smart tiling. On the first floor there are three bedrooms and a small study that could also be used as a nursery. The master bedroom has an enviable ensuite that feels really private, but is bathed in light thanks to its opaque windows, one of which is crescent shaped, echoing the shape of the fan light over the front door. It has a separate shower and large egg-shaped bath.

At garden level there are another two bedrooms, as well as a sitting room-cum-dining room and small galley kitchen with a door leading out to the back yard. This space does not have planning to rent as a self-contained apartment, but is under licence for the rent-a-room scheme and the current owners have earned an income of €1,400 per month on this basis. Given its proximity to Grangegorman, this could be useful, tax-free income.

There is no off-street parking to the front but there is vehicular rear access off Peter’s Lane, accessed via Cabra Park, and there is parking for one car, although the next owner would need to be very sure of his or her parallel parking to fit into the tight space.

The move back to Dublin didn’t work out for the owners, because of the weather. As avid golfers, they’ve been drawn to the sunnier climes of Spain where they have since moved.