Georgian proportions and modern finesse on an acre by the Shannon estuary for €445,000 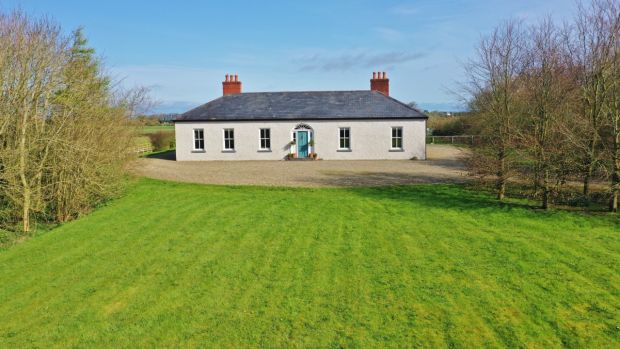 “It’s all down to my husband, Peter,” says Ellie Byrne, of their home outside Askeaton in Co Limerick. “We really could not get an architect to listen to us, it was all: ‘Why do you want ceilings over 10ft, and why the need for wooden sash windows?’ when we were looking to build 20 years ago. But Peter [Dundon] is an historian and an archaeologist, and has a fascination with proportion, so in the end we went ahead and designed it ourselves”.

It is difficult to tell from the exterior photographs that this property is just 20 years old, with its proportions, roof pitch and the use of old slates.

“We really made things difficult for ourselves, but wanted to keep it as realistic as we could,” says Byrne. “When we were trying to get a fan light made for over the front door, any carpenters we spoke to wouldn’t go near it, as it meant taking the safety guard off the tool required to cut the curve, so we had to go the whole way to Tralee where we found someone with that expertise,” recalls Byrne.

The couple spent months in search of slates that would match, and found period pieces that would add character to their home. Old oak parquet flooring came from a post office in London and internal doors from an Georgian pile in Limerick in addition to two period cast-iron fireplaces sourced in antique shops. A fourth bedroom is now used as an office, with a sofa bed for overnight guests, and the oak panelling here was inspired by the bar in the Dunraven Arms Hotel in Adare, where the couple celebrated their nuptials.

There are a few musical instruments lying about their 223sq m (2,400sq ft) home. For 18 years Byrne was the press and performing arts manager at the Irish World Academy of Music and Dance at the University of Limerick. In 2014, she established her own company, Ellie Byrne Promotions, to manage and promote Irish musicians such as Declan O’Rourke, Altan and Martin Hayes. So their home outside Askeaton became a meeting point where musicians would gather and play.

“At the height of the Syrian disaster I arranged a fundraiser here, where the late Mícheál Ó Súilleabháin and Martin Hayes played and the house was full to the brim with people.”

Lying on an acre, just outside the historic town of Askeaton where Dundon can trace his family’s heritage to the 14th century, there is a further option to purchase paddocks, a sand ring and stables in another field behind the house. The property itself has views of the Shannon estuary and a little marina for boating enthusiasts is just two fields away, with the yacht club in Foynes a 10-minute drive.

The couple are moving to Kilkee in Co Clare, to the home of Byrne’s late mother, and have placed Toomdeely Lodge, in turnkey condition and with a BER rating of C3, on the market through Sherry FitzGerald seeking €445,000.