From tiny cottage to dream home in Carrickmines for €745k 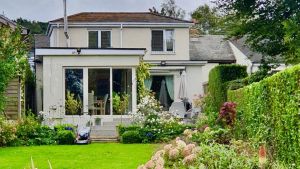 When Glenamuck Cottages in Carrickmines were constructed in 1910, they were built as self-sufficient homes with large gardens, in what was then the countryside. This has become one of their real selling points today.

At number 23, which was purchased by Kathleen Kiely and Evan Brennan in 2006, it was the almost 61m (200ft) long rear garden that clinched the deal. “We had almost bought another house but came to see this one. It was tiny – about 37sq m (400sq ft) – and had a lean-to kitchen that later collapsed. But when we saw the extent of the garden, we got the agent to call the owner and wrote a cheque for the deposit before we left. We just knew it was for us,” says Kiely.

The husband and wife team then extended the house in two stages; firstly in 2007 and again in 2015. From the exterior you would be forgiven for thinking that this is a small and unassuming property. What lies inside is a four bedroom light-filled house extending to a generous 193sq m (2,077sq ft) in turnkey condition.

“What was really great was that we could plan our dream home. With all the space to the rear we were not confined, so we could really take advantage of the aspect in terms of light and where we placed certain rooms,” says Kiely.

The garden – laden with colour from plants and trees in herbaceous borders – has been the setting for all the confirmations, communions and family gatherings while the couple raised their children.

“We never had to think about limiting numbers as it takes so many people and you can fit in bouncy castles and the like. We really got to enjoy it during lockdown – it was quite therapeutic.”

The kitchen, panelling and wardrobes were installed by David Hemp of DH Construction. “We call him Hurricane Hemp,” laughs Kiely “as nothing was ever an issue and he always found solutions when we were drawing up the plans.” Hemp also constructed a bar off the dining area, which has served many a pint at family gatherings.

Much of the decor was sourced from the Design Emporium in Deans Grange. “They were really fantastic, if they did not have what we wanted they sourced stuff for us,” says Kiely.

The property has two fireplaces; a gas log-effect fire in the dining room, the flames of which can be seen in the garden at night, and a wood-fired stove in the television room.

All four of the bedrooms are doubles; the principal has an en suite, a walk through wardrobe and a lovely Juliet balcony overlooking the rear garden.

With an empty nest the couple are downsizing and have placed their home on the market through Brady and McCarthy Estate Agents seeking €745,000.

Food & Drink Quiz: Black Forest gateau is made with which fruit?
10