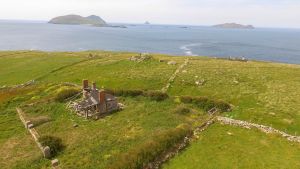 The ruin of the west Kerry former cliffside home where writer Máire Mhac an tSaoi spent many summers has been attracting overseas attention since it was recently placed on the market.

Built on a spectacular quarter-acre site on the edge of the Atlantic near Dunquin in the early 1920s by the poet’s uncle, Monsignor Pádraig de Brún, Tigh na Cille will go to online auction on July 9th with a starting bid price of €120,000. The small wood-framed structure, with three brick chimneys, boasts breathtaking views of the Great Blasket Island and Dunmore Head and is just a 10-minute walk from the famous Kruger’s Bar.

Mhac an tSaoi, who celebrated her 98th birthday in April, is the widow of the late Conor Cruise O’Brien and daughter of former tánaiste Seán MacEntee. Her mother, Margaret Browne, was a sister of Fr de Brún and he had the house built for the MacEntee children so they could spend summers growing up in an Irish-speaking community.

Selling agent Anthony Fitzgerald, of Fitzgerald estate agents in Dingle, said that due both to its history and location on the edge of one of the most westerly points of Europe, the property has been attracting interest from North America and the UK.

The property passed through the family to Mhac an tSaoi's brother Seamus MacEntee  and it was sold on by his widow Jean in recent years. The latest sale is being conducted on behalf of the current owner. “The property is famous for its spectacular views, its popularity among the literati, and [it] is conveniently located close to many amenities in the area, including the Great Blasket interpretive centre, Kruger’s pub and Dunquin pier and ferry,” he said.

Though the house is in a clear state of dilapidation, Fitzgerald says that, historically, local planners favour granting permission for development on sites which have an existing structure.

“That [state of the house] has not put off potential buyers. Indeed, there has been very strong interest since it was placed on the market from the US, the UK and from all over Ireland. This is a unique, historical property, the likes of which rarely come on the market.”

Fr de Brún, a priest, scholar and well-known academic administrator, was taught maths by, and later became a close friend of, Éamon de Valera. He is said to have cycled to Dunquin to find solace following the execution of his friend Seán Mac Diarmada and fellow revolutionaries in 1916.

It was in the early 1920s that he built Tigh na Cille (which means “The House of the Old Church Site”), which he used during college holidays as the base for his studies and compositions in Irish.

In her 2003 memoirs The Same Age as the State, Mhac an tSaoi described the house, built within an old religious settlement, as a modest red-roofed bungalow “clinker-built of creosoted timbers to a Scandinavian plan”.

“It was, and remains, the most westerly dwelling on the mainland of Ireland, ‘the nearest house in Ireland to America’, as we would proudly assert as children. The house was built for us, his sister’s children, so that we would grow up speaking Irish naturally, in completely Irish-speaking surroundings,” she wrote.

The house was designed by the family’s close friend, the architect Tom Cullen. “Our bungalow was crested black on the outside with a green front door and white framed windows; it had a brilliant red felt, pyramid roof and was anchored to its foundations by two massive brick chimneys; it looked like a child’s drawing of a very pretty house,” Mhac an tSaoi added.