Former judge’s slice of heaven on Wicklow lakeshore for €1.25m 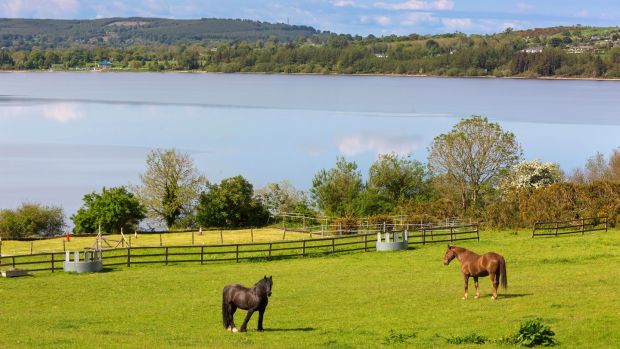 You know you’re in the countryside when distance to the local hostelry is measured in fields rather than kilometres. For Pineridge Farm, a regency-style country home overlooking Lough Poulaphouca, it’s just three fields to the village of Lacken, or five minutes if you prefer to take the stroll along the country road.

Pineridge Farm is home to retired judge and former Workers’ Party TD, Pat McCartan and artist wife Felicity. McCartan stepped down in 2016 after 19 years on the Circuit Court bench, and in his time presided over some high-profile trials including the Anglo Irish Bank trial.

The couple had been under-bidders for a property at the far side of the lake “then this site came up and I knew immediately it was for us, as it was like landing in heaven”.

In 1997, the couple purchased the site; an original two-bedroom cottage dating from 1870, with two outbuildings on 17 acres, and lived there until their home, designed by conservation architect Clare Hogan, was constructed. The only tell-tale that this perfectly symmetrical house is a new build are the plastic downpipes and fascia.

What is on offer today is a 268sq m (2,880sq ft) classically designed house and a two-storey cottage – currently used for guests. In addition, are two converted one-storey cottages; one is now a huge billiards room with an adjoining boot room for McCartan, and the second is Felicity’s atelier.

The main house has had some wonderful period additions; the parquet flooring in the hallway was salvaged from the Bank of England, and the old fireplaces were collected by the couple over the years, including a rather beautiful ornate Godin stove – which now heats the kitchen and breakfast room “like a furnace”.

An old parapet, which once graced a house on Thomas Street in Dublin, frames the old slate flagstone patio against a bank of profusely flowering Blanc double de Coubert; a rose which was introduced to Europe from Asia, the same decade as the original cottage on the lands here were constructed.

Most interesting, though, is the kitchen: “When we arrived here we had to cut down some cherry trees to construct the house, the felled trees were taken away by Hans Leptien [of Hands on Furniture in Ardgroom Co Cork] who arrived back two years later when the house was ready, with a kitchen made from our own trees.”

McCartan planted additional trees on the 17-acre estate, in the form of a cider apple orchard – which allows for 200 litres of cider annually, made from the cider press in his boot room.

The property overlooks, and gently rambles down to the shores of Lake Poulaphouca, which is now a designated area of Special Protection by the National Parks and Wildlife Service and noted for its greylag goose population.

At the waters’ edge is a boathouse, slipway and offshore mooring, where the family sail each summer – over and back to Blessington Yacht Club which lies across the vast lake. The sound of birdsong endures against the silence, as the lake prohibits any engine over 6 horsepower, ruling out the intrusion of jet skis or fast boats.

A further amenity of the estate are paddocks, four stables and a tack room. McCartan a keen rider, has raised hunters on the property. For equine enthusiasts Punchestown and Naas racecourses are a short drive away, as are local stud and training farms at Ballymore Eustace.

And if all these amenities were not enough, McCartan has started the installation of a proper croquet green. So far it has been completely drained and levelled and lies on a terrace overlooking the lake, but it would also be large enough to accommodate a tennis court should new owners prefer.

Locally the area offers polo and golf within a 10-minute drive, while Dublin city is just 45 minutes’ drive.

McCartan’s fondness of the area is evident, and no doubt he will miss Pineridge Lodge, but warmer climes of France are beckoning, and the family have placed their slice of heaven in Co Wicklow on the market through Sherry FitzGerald Country Homes with an asking price of €1.25m.