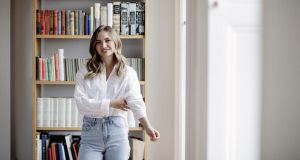 Little Green Spoon blogger Indy Power has made the very most of a tiny cottage on a secret Blackrock street. Photograph: Al Higgins 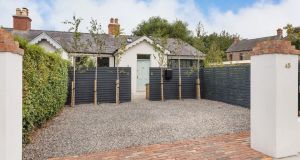 Food fans may recognise the kitchen of 45 Brookfield Place, an end of terrace cottage on one of Blackrock’s secret streets. The Lamp Black kitchen units, designed by Rhatigan and Hick, set under calacatta marble-look quartz countertops, are those of Little Green Spoon blogger, cookbook author and recipe app writer, Indy Power, who has almost 68,000 followers on Instagram.

But the kitchen usually only plays a backdrop to a delicious-looking bowl of something vegan and the shots fail to do the room justice. For Indy, who shares the double-fronted artisan cottage with her husband Tom Parsons and young son, they have turned what was a tiny end-of-terrace house of about 40sq m into a smart, light-filled two-bed with more than 102sq m (1,098sq ft).

When they bought the property in March 2018, for €420,000, according to the property price register, it needed everything done to it.

But it was on a sizeable plot, so they pushed the property out to the side and back to give it two good-sized bedrooms, which are set to the front of the house, on either side of the hall, floored in a tile that emulates the Versaille parquet pattern.

The main bedroom is to the left and is painted a restful shade of mink – Newgrange by Colortrend – and has an internal shower en suite with a marble, basket-weave tiled floor, that Indy sourced from Fired Earth. Under-floor heating runs throughout the home. “I wanted a hotel-like finish,” she says. The stall has fashionable black metro tiles, Crosswater brass ware and a black shower screen frame.

She says Sandra Nolan, of Studio 3 Architecture, and Co Mayo-based builder Tom Henegan were vital to finishing the build to their specification. “I loved doing the project and want to do another but to have more breathing room to complete it,” she says of their decision to move. She was pregnant with their son while undertaking the works here.

The living room is to the rear and has sliding doors opening out to a west- and south-facing terrace. The room has a wall of glazing on one side and a wood-burning stove on the other, a heat source the family has used only a couple of times because the house is now so warm, she says. It has been well insulated and has Aluclad windows and glass doors. This room is bright but not huge and is open to the hall which leads through to the dramatic and light-filled vaulted kitchen.

Here a family kitchen table has been sanded to remove stains. Its warm timber tones add heat to the smart cabinetry, which includes oak and leather-lined drawers. Indy’s stainless steel, seven-ring Smeg range cooker, with not one but three ovens and a warming drawer, is her pride and joy.

On sunny days they take the dining table out into the walled terrace, which enjoys south and western sun. The space is bounded to the south by Rockfield Park where you can exercise or join Carrig Lawn Tennis Club, and to the west by the garden of a large period house. It is an oasis of calm that planted with a eucalyptus tree, an ancient olive, a small birch and several New Zealand ferns

The second double bedroom has a box bay window overlooking the lawn to the front and it adjoins the family bathroom where there is a free-standing tub. This could easily become an ensuite.

The house and its front gardens, which are to either side of the front door, are hidden behind a high hedge that gives privacy and runaround space for a toddler. It also gets both western and eastern sun.

The high-specification property and its privacy will appeal to down-traders and small families. It is seeking €725,000 through agent SherryFitzGerald.

There is off-street parking for two cars and these are blocked off from the house by smart picket fencing.