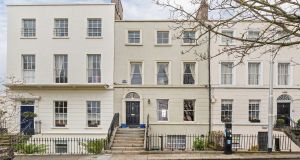 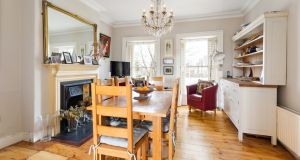 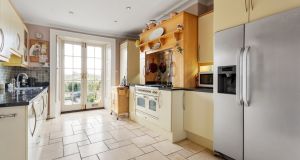 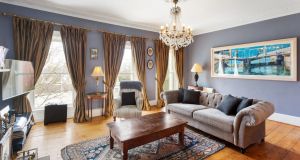 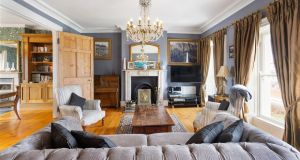 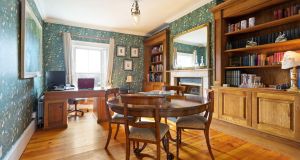 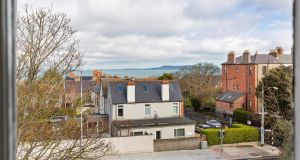 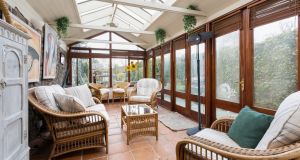 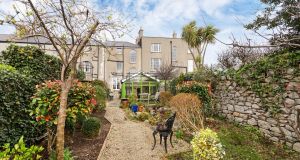 Montpelier Parade sits on an elevated strip, set well back from Monkstown Road, and number 6 is one of 10 houses on the terrace built by Molesworth Greene in the 1790s.

The three- or four-bed property extends to 265sq m/2,852 sq ft and has lovely sweeping views across Dublin Bay from its first and second floors while the back of the house has a warming southern aspect, and windows framing vistas of Killiney Hill Park and the Dublin Mountains.

The house has a fine hall where the ceiling heights are about 12ft and where the dining room leads through to the cream painted kitchen. Up on the return is a timber conservatory and the pointed granite boundary wall has been made a feature. The room has a vaulted ceiling with a bank of roof lights running the length of the room.

There are several sets of double doors leading out to a terrace and artificial lawn. The garden extends to about 35 metres and is a private and sunny space with a southerly aspect. Hidden from view is a large double garage with valuable off-street parking for up to two vehicles. Subject to planning permission, this stone building could be converted to a mews house.

The house really opens up over its second and third floors. The drawing room to the front of the second floor takes in views all the way across Dublin Bay. The room has original timber floorboards and a marble fireplace with cast iron surround, similar but not a match, of the mantle in the library on the other side of interconnecting waxed pine doors.

The two main bedrooms are on the third floor. The main bedroom to the front enjoys sea views. There is a good-sized, smartly appointed bathroom adjacent with a separate bath and shower.

The house is laid out over four floors. The garden level can also be accessed via a separate, stepped entrance. This is where the third bedroom is found and it’s feasible that a living room to the front could work as a fourth bedroom. Alternatively it could work as a one-bedroom apartment that remains within the main house layout and would adhere to the Rent a Room scheme tax break requirements. It has a kitchenette and bathroom.

The property is seeking €1.5 million through agent Vincent Finnegan.