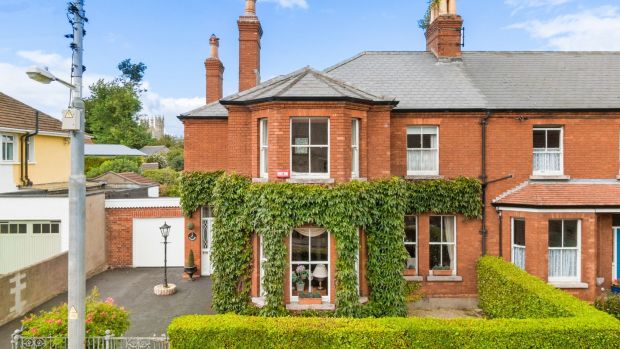 Edwardian homes have a great sense of proportion – from light-filled windows to generous ceiling heights – that give a balanced interior which usually translates well to modern living.

Burnham, at 1 Pakenham Road, has these qualities in spades. Built circa 1901, the two-storey home is set on a wide plot with plenty of off-street parking to the front, as well as a garage to the side. The reception rooms are of a size that can be used every day rather than just being relegated to “special occasion” use.

More importantly, this is a home that has been allowed to age ever so gracefully, eschewing drastic cosmetic overhauls along the way. Rather than nipping or tucking its fine original features to meet the trends of the day, the Pakenham house has been beautifully maintained, resulting in the beauty equivalent of looking good for your age.

To the rear is a second sitting room where French windows lead through to a timber conservatory with a lantern top and access out to one of the property’s stand-out features, its generous garden.

Laid out in lawn it is punctuated by mature fruit trees and is incredibly private. While north-facing, it is neither overlooked nor overshadowed and gets plenty of sunlight. Its boundary walls are ivy clad and there is high fencing between it and its neighbour. At 26 metres in length and 17 metres across there is also handy pedestrian access to the lane to its rear. Subject to planning, there may even be scope to build a home office or similar here that could open out to the lane.

The kitchen is situated to the rear of the dining room and was last renovated in the 1980s when its Edwardian-style cabinetry, tiled counter tops with brass rail, and copper hood over the hob were all added. These design features are back in fashion although its unlikely the next owner will retain them.

Originally there was a hatch between the dining room and the kitchen and one option might be to marry these two rooms together. There is also scope to extend out to the rear and even up the back line of the house, areas that currently include a guest toilet and utility. A small extension would provide a good utility room.

Upstairs are four double bedrooms set around a large and light-filled landing. All are of a good size and have ceiling heights of 2.8 metres.

What the next buyer will most want to address is the current heating system and to replace the old electric storage heaters with something more efficient. While charming and in good condition the single-glaze, sash windows also contribute to the property’s low Ber rating of F.

The house is within a five-minute walk of Monkstown’s increasingly chic main drag and about equidistant from the Dart station at Salthill & Monkstown. Swimming at Seapoint is less than 10 minutes away as is the harbour in Dún Laoghaire.