Double helping of cool Scandi style in Kilmacud for €950k 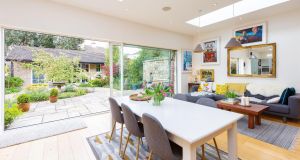 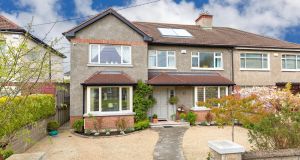 Slieve Rua Drive is a quiet suburban road running parallel to the busy Lower Kilmacud Road. It comprises good-sized 1950s semi-detached homes set around a small green, and many of the properties have been expanded to double their original size, creating fine, modern-family homes with en-suite bathrooms, underfloor heating and open-plan living.

Number 40 is one such house. The owners, Kevin Houlihan, a builder/inventor/artist, and Kathrin, his Swedish wife, have married their talents to create a really impressive home set around its gorgeous garden.

Kathrin has injected her Scandi know-how into the relaxed interior – it is visible in every detail, from the stack of candles boxed on a console table in the hall to the artfully casual way sheepskins and rugs are thrown on to seating. Kevin has managed to use every centimetre of the wide plot to create a home that is practical as well as pretty.

“A lot of what I do is the symmetry, balance, light and shape of a space,” explains Kevin. “Kathrin is in charge of colour and fabric choices.” Together they run Houlihan Construction and are currently developing a couple of new-build homes in Lakelands that will be coming to market shortly.

When they bought in 2008 it was on a wider than usual sited semi with box-like extensions that had been added in the 1960s and 1970s. “We could see the potential,” says Kevin.

Their resulting works have delivered a really well-considered home in turnkey condition.

The roomy hall double doors lead through to a sitting room. Set to the front, it has south-facing mountain views; Houlihan’s art hangs on the walls and a wood-burning stove adds warmth. The logs for the fire are kept under the stairs – easy to access on cold winter nights.

A second set of double doors open to reveal an enormous L-shaped room with timber flooring underfoot and light everywhere, thanks to the sizeable glass-sliding doors, about six metres wide, that frame the beautiful garden.

The kitchen sits in the foot part of the L with two sitting areas set adjacent to each other; one is a cosy corner around a large double-door Charnwood stove, the other a large L-shaped sofa that overlooks the garden. The dining table is situated in the middle of the room under a lantern roof light.

There are a further two roof lights in the large space, one over the sofa, the other over the large square-shaped island with its reclaimed timber countertop.

The original garage has been turned into a third room and is used as a study, with lots of hanging storage for coats and sports kits, and a shower en-suite.

Originally a three-bed, the house now has four bedrooms on the first floor. The master now extends the depth of the house, has a full corner of wardrobe space and a large shower en-suite with roomy shower stall and his and hers sinks. There is also space to add a bath.

They’ve converted the attic too, which includes a separate study space, and this is where the last of their children still living at home has installed himself.

From here you can see the gorgeous garden room, used by Houlihan as a studio space and where he recently put the final polish to prototypes for his most recent invention: “Activalve”, a device that automatically shuts off water supply in homes where temperatures regularly drop below freezing. The device has been licensed to an Italian manufacturer and is being sold on Amazon for use in the US and Japanese markets.

The couple want to trade down and are on the lookout for another project. The house is asking €950,000 through agent Janet Carroll.

What are your funeral options if you don’t believe in God?
3