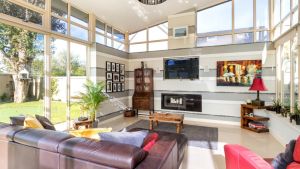 Pilgrim’s Rest is a detached dormer house, built 12 years ago in the garden of the owner’s then property and named after a small gold rush town in the Mpumalanga region of South Africa where one of the owners’ parents lived.

Situated on the busy Leopardstown Road, the house is set well back from the road and has off-street parking for several cars. Designed by Brennan Brown Architects, it includes creature comforts such as underfloor heating, zoned lighting and broken plan spaces washed in light. Decorated in a simple, neutral palette, the property extends to 223sq m/2,400sq ft.

Built on a wide, crescent-shaped site, the front exterior, which faces south, has a zinc and tiled roof, rendered walls and slatted wood detailing. From the welcoming hall, the eye is drawn toward the open tread, steel frame staircase.

A polished porcelain-tiled floor extends through the house and down steps to the kitchen, which is set around a sizeable island.The dark wenge stained units, a design by Minnie Peters, have satin-finish nickel handles and run the depth of the space. Appliances include double ovens and a warming drawer.

Off this is a large, internal utility room fitted with the same units as the kitchen. Overhead is a towel rack hung horizontally from the ceiling like a monkey bar. For the GAA mother who takes charge of the thankless job of washing the squad’s jerseys, and this helps expedite their drying. It is a really fresh idea that would makes sense in a lot of homes across the country – football kit or otherwise.

The back wall of the house is almost entirely comprised of timber-framed glass, a stylish design that allows the inhabitants to enjoy the entire expanse of the garden from inside.

The living room takes in light on three sides and it is so bright that the owners had added film to its clerestory windows to dim down the glare.

The dining area is set around a large square table where the owners have hosted up to 27 people for Christmas dinner, something they won’t be doing this year. The broken plan set-up allows the cook to commune with guests and be, as she puts it, “part of the party”.

There are two rooms to the front. One is used as a bedroom, the other as a home office or as a fourth bedroom. Upstairs the main bedroom is dual aspect and has a sizeable shower en suite, which means the second double can enjoy exclusive use of the bathroom at the other end of the hall.

At night there are cracking views of the city lights from here. It is especially alluring at Halloween, says the owner, when in normal times fireworks light up every area.

The house, which is seeking €930,000 through selling agent Lisney, is just a few minutes’ walk from Sandyford Village and overlooks a link road to the M50 motorway. Green line Luas stop Glencairn is about a 15-minute walk.

My tenant is subletting without my agreement. What can I do?