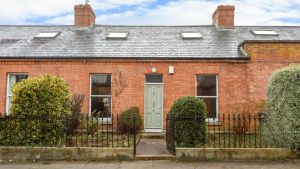 Number 27 Coulson Avenue, a cul de sac in Rathgar located within a brief stroll of the village, last changed hands nearly two decades ago. One of the few double-fronted houses on the road, it needed considerable renovation with the owner taking the opportunity to reconfigure the layout of the 1,432sq ft (133sq m) mid-terrace redbrick.

A key decision was to change the position of the staircase; at that time the original steep wooden steps were still in situ to the rear of the house leading up from the kitchen to the bedrooms above. The owner moved the staircase to the end of the entrance hall relocating the bathroom that was there to a larger space upstairs. Now the Victorian-era cottage is symmetrical in layout – four rooms downstairs and four above at attic level, decorated with stylishly bright colours on the walls and polished floorboards.

On one side of the hall the two rooms interconnect – a living room to the front opening into the eat-in kitchen at the rear. A glazed door opens out from the kitchen to the rear garden. On the other side of the hall are two more reception rooms – one is used as a home office. There’s also a guest toilet on this level.

Upstairs are the bathroom and three bedrooms – the two to the rear have glazed double doors opening out to Juliet balconies.

To the front, the garden is enclosed by its original railings, while to the back the 6.6m long garden is set out for low maintenance with gravel, raised beds and decking.

These houses, considered modest when they were built by their Victorian-era developers, were designed with a nod to the far grander nearby houses so they have tall ceilings at hall level, well-proportioned rooms and sash windows with shutters. When they change hands now, buyers tend to look to extend to make use of every inch of these popularly located properties. Whoever buys number 27 will probably at least seek to improve the E1 energy rating.

Parking is on street, which can sometimes be tight as this little cul de sac was laid out at a time when car ownership was not an issue. Number 27 Coulson Avenue is for sale through DNG seeking €745,000.