Dalkey villa with design in every detail for €3.5 million 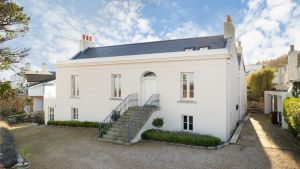 Coliemore Road in Dalkey is one of Dublin’s smartest addresses, our very own Amalfi, as it has sometimes been described. Statement homes on the coastal side routinely attract multimillion-euro sums, the other side less so, as they don’t have quite the same uninterrupted sea views.

Number 92, Cnoc Aluinn, is a handsome late-Georgian villa perched neatly on an elevated site just where the road winds down from the village. It doesn’t have uninterrupted sea views, but it’s a fine property that was given a no-holds-barred upgrade after it was bought most recently in 2015 for €2.5 million.

Located in the home of the popular Dalkey Book Festival, the south Co Dublin property has a nice literary claim to fame, having been for years the home of Ernest Gébler, writer and former husband of Edna O’Brien. Gébler, it seems, put his own eclectic stamp on the place over the years, applying somewhat limited DIY skills to general repairs.

The architect Ross Cahill O’Brien was given a blank canvas to recast the house beyond its facade, and he clearly applied himself to the task, adding design signatures along the way

When previous owners bought it from him, in 1990, it firmly fell under the heading of restoration project. They tackled it as a labour of love and restored it as a charming, elegant home true to its 1843 origins, retaining the kitchen downstairs while the main receptions and three of four bedrooms remained upstairs.

It served as a fine family home until it was placed on the market again in early 2015; by June that year it had sold for €2.5 million. Its new owners, Barry O’Sullivan and Rachel Pope, then embarked on a 15-month refurbishment that transformed the property completely, giving it 280sq m/3,000sq ft of space and a relaxed New England vibe.

The acclaimed architect Ross Cahill O’Brien was given a blank canvas to recast the house beyond its facade, and he clearly applied himself to the task, adding design signatures along the way.

The house is no longer accessed from the front; the entrance is instead at the side. Once inside, a short flight of steps leads up to the main floor and a double-height open living area that makes an immediate statement. Vaulted tongue-and-groove ceilings rise to the apex, light floods through a bank of rooflights on one side, and wood panelling and wide-plank oak floors add warmth.

The floors on this level all had to be raised to allow higher ceilings on the accommodation level below. The original deep set windows are floor to ceiling and crisply outlined like mounted box frames – a design feature that runs through the property. The front entrance can also be reconfigured as a further box window if required.

Off the living area is a snug TV room with open fireplace and, above it, a mezzanine gallery room accessed galley style via a narrow wood stairs. With two rooflights overhead, this has the best sea views in the house.

The dual-aspect drawing room, painted a deeper shade of Little Green blue, is more formal, with a plastered ceiling and deep coving bringing it all together around the central fireplace. From here the tall box windows open out to a small corner balcony overlooking Coliemore Road and the sea beyond.

A real design surprise here is a jib door in the panelling that reveals a hidden room which Rachel Pope says was originally conceived as a hexagonal wine room. No afterthought, this all has an impressive finish. The smart joinery incorporates two recessed alcoves with built-in seats, a central rooflight, access to a small balcony and even a serving hatch, presumably so the wine tasters need never leave.

To the rear the extended property takes in the kitchen living area. The Michael Farrell kitchen is anchored by a curved central island angled to look straight out to the rear garden. With clerestory windows to the side and floor-to-ceiling windows on to the garden, it feels a little like the bridge of a ship. Despite so many nautical references in the design, they are subtle enough to avoid Captain Birdseye overkill.

“We tried to keep it simple and relaxed. We’re here three years and find it’s just right for a regular-sized family like ours.” (There are three children). “Having lived in cold houses before, I wanted it to be cosy, and it is definitely that: there is constant warmth,” says Pope.

Unusually, there is no guest bathroom on the upper level, although a large cloakroom could easily be adapted to create one. The solid-wood staircase to the lower level with glass and steel banister is beautifully simple. The downstairs accommodation comprises three double bedrooms, each with fitted Michael Farrell wardrobes and desks, two bathrooms and, at the far end, a main bedroom suite with a generous en suite, walk-in wardrobe and a private corner nook with outdoor access.

In these lower rooms a curved wall-to-ceiling finish has been applied to maximise how light is bounced within each room, creating a warming effect. Pope says that, although it looks simple, it’s a time-consuming process, and one for which builder Sean O’Shea and his team deserve great credit. “They were just brilliant. Very calm but very serious about doing it right. None of it was easy, but for the work that was done they provided good value.”

Cnoc Aluinn stands on just under 0.17ha, or 0.4ac, with a decent flat strip of grass to the front, beside the driveway, that would make a good spot for ball sports or even a kitchen garden, while the landscaped rear garden has been set out in decking and limestone patio areas bordered by plants, trees, shrubbery and a water feature. Directly southwest facing, with a low boundary, it takes in all-day sun.

In May last year a very different semi-detached period five-bed of similar size and on a limited site two doors down, was placed for sale seeking €2.5 million; it  sold relatively quickly, by October, for €2 million. Cnoc Aluinn is for sale through agent Vincent Finnegan seeking €3.5 million.