Three-bed terraced villa in Portobello, with glass-roofed extension and courtyard, for €725,000 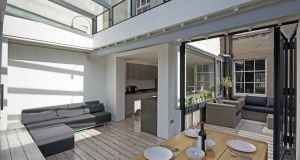 If the devil is in the detail, then he has been busily at work transforming a charming three-bedroom terraced villa on Heytesbury Street in Portobello.

Home for the past decade to human resources consultant Velma Roberts, digital designer Henry Poskitt and their two children, the house is testament to what can be achieved working within the constraints of a period property and protected-structure designation.

“For a lot of clients, an extension is all about adding square metres, rather than how space is used,” says architect Greg Zakrzewski, who oversaw the project, completed in 2012. “In this property we wanted a clear read of the fabric of the original house, retaining most of the garden, and the trick was to keep the palette basic.”

Rather than install modern flooring in the extension, the couple imported reclaimed 19th-century red deal from a hospital in Wales, and gave it a swish limed finish, which echoes the hues of the taupe Corian counters used in the kitchen and family bathroom. 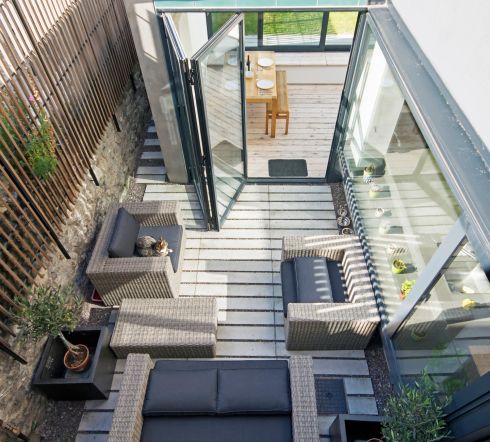 Having enjoyed a sun-filled patio for almost a decade, the couple insisted on a courtyard in the new design. This now sits off the glass lightbox extension, and is used by the family nine months of the year.

“The beauty of having a glass roof in the extension is it creates a fabulous space for stargazing,” says Velma of the impressive ceiling.

Storage was high on the list in the brief, and Zakrzewski created clever solutions throughout the house, including hidden utility units in the space occupied by the original coal house and, in the extension, a bank of seating that houses all the family toys.

Reception rooms at hall level retain all their period details, including twin-horseshoe fireplaces and pine flooring.

Shuttered sash windows have been reconditioned by Frank Clissmann, of sashwindows.ie, who also created the new front door, as the original had been removed years ago.

The family are moving around the corner to a larger property, and this fine 154sq m home is on the market through Paul Tobin Estates at an asking price of €725,000.