Bountiful Waterford estate where gardens earn their keep for €3.25m 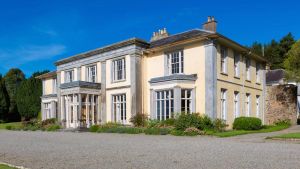 The Blackwater Valley is often associated with Co Cork for its fertile rolling grassland, but it also takes in a stretch of west Co Waterford that is home to some of the finest country homes in Ireland. The Lismore Estate is the jewel in this crown, on 8,000 acres it remains today in the hands of the duke of Devonshire, one of the biggest landowners in the UK.

Lismore Castle Arts – located on the grounds – has widened the cultural appeal of the region, and a number of smaller “great houses” dotted along the river banks have opened their historic grounds and gardens to the public, adding to the appeal of this tucked-away corner.

Salterbridge in Cappoquin is one such property. A stone’s throw from Lismore, it was built in 1751 by Richard Musgrave on land acquired from the Lismore Estate. It is said that William Atkinson may have completed it while refurbishing Lismore Castle for the Devonshires. Originally thought to have been a shooting lodge, it was further aggrandised in the mid and late 19th century. Described as regency picturesque and grade-one listed, it has proportions modest enough to make it attractive for modern family living.

Certainly its current owners think so. Only the second family to have lived here, the Wingfields took ownership in 1947. Philip and Susie Wingfield moved with their family from Dublin in the mid-1990s to live in the Stewards House and be close to Philip’s parents. In 2004 they moved to the main house after Philip’s mother died.

“It’s a really easy house to live in. The rooms flow nicely into each other – you can make the drawing room and morning room just the right size for parties. It’s a great family house to welcome everyone in and have grandchildren running around,” says Susie.

The striking Victorian wood-panelled hall has been at the heart of family and community events at Salterbridge. It has hosted a family wedding for 120 people and music recitals as part of Blackwater Valley Opera Festival.

The atmosphere is one of relaxed grandeur that’s typical of the period and survives the test of time. Box-bay windows stream sunlight across wooden floors in elegantly proportioned reception rooms with warming fireplaces at their hearts. The kitchen is old school but bright, with high ceilings and a bank of floor-to-ceiling windows in the dining area. This, along with other parts, will no doubt be modernised by new owners, but a good bone structure exists.

Upstairs are eight bedrooms, all well turned out though without the attendant array of modern en suites that’s so often expected.

When it comes to accommodation at Salterbridge there is certainly no shortage. Beyond the 1,450sq m (15,600sq ft) main house, the Steward’s House, beside the stable yard and farm yard, has five bedrooms. (It has only had three tenants over its lifetime.) In addition there are two gate lodges, one of which has three bedrooms and the other of which, a one-bed, has been meticulously restored by the Irish Landmark Trust, which specialises in conserving and letting notable Irish buildings.

A delightful little structure, Salterbridge Gate Lodge has a most unusual hexagonal entrance hall designed to impress arriving visitors to the estate, with modest accommodation on either side. Susie says it is occupied by visiting tourists almost year-round. The property is under lease to the Irish Landmark Trust, but it could be reverted to ownership if required.

Salterbridge sits on just under 55ha, or 136ac, much of which is in grassland. Before the second World War the lands were a major supplier of daffodils to the Savoy Hotel in London, and their blooms still cover the lawns every spring.

The almost 2.5ha, or 6ac, of gardens surrounding the house are a key feature of the property, having been lovingly planted and maintained for generations. There are four Irish yews dating back to when the house was built, one of the largest cork oak trees in the State and examples of Cox’s juniper, a Korean fir (with blue cones) and an Indian horse chestnut.

Philip has a passion for gardening, evident in the fine, full blooms of rhododendron, magnolia and camellia. For a landmark birthday Susie commissioned a “woodhenge” in the grounds from the Wicklow sculptor Naomi Jobson, based around a branch of yew knocked by a falling oak. Every year the gardens are opened to the public for 60 days under section 482 tax relief, an endeavour the Wingfields have enjoyed as garden enthusiasts, and an option open to any prospective buyer.

About 20 years ago Philip responded to an ad in the Irish Farmers Journal by Jim Costello, a leading foliage grower in Co Kerry, calling for suppliers of foliage to the flower industry. And so a profitable business began, growing eucalyptus and pittosporum for export to flower markets in London and the Netherlands (with a little going to Ruth Moynihan, at Apassionata Flowers in Dublin, too).

With a tennis court and stables on site, the new Greenway cycling route, just 20 minutes away, and Clonea Beach at Dungarvan, within a half-hour, it would be an idyllic spot for a growing family. Asked what he likes most about Salterbridge, Philip says: “Getting away from Dublin. It’s just such an unspoilt part of the country, of Europe in fact. We’re very lucky; we can walk down to the river. It’s a very special place to be.”