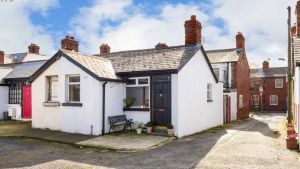 Television producer Jane Taaffe bought number 14 Brabazon Square, her one-bedroom, end of terrace artisan cottage in the heart of Dublin’s Liberties, in 2006 and enjoyed several years of kicking-up-her-heels singledom before meeting Eamon O’Halloran and the pair now have a daughter, Lily.

Taaffe, who has worked on TV shows Who Do You Think You Are, Ireland’s Fittest Family and Gogglebox, adapted to family life. The couple had to order a specially small cot for the baby from Scandinavia to fit the space but the three shared the bijou house, which has an open-plan living space with a small kitchen in its front nook. Its 32sq m/344sq ft size felt bigger because of its high ceilings.

On fine days she would leave her front door open, something all the neighbours did. “People would sit on the bench on in their front step. There was a couple of babies and a couple of dogs and it had a cool sense of community. You never felt lonely.” Her only regret is that she didn’t replace the front door with a traditional half door while she was still living there. It would have been helpful when her daughter started toddling.

The houses on the street were built by the Dublin Artisan Dwelling Company, beginning in the 1880s and number 14 overlooks Gray Street to the back, where Imelda May’s family home is and in whose centre stands a copper-domed canopy sheltering a Sacred Heart statue.

Taaffe moved out in 2013 to a bigger house in Dublin 15 and has rented the place ever since. “It just got too crowded with a buggy in the hall,” she explains.

But it continues to draw her back. Even on her wedding day in 2017 she returned to the neighbourhood to have her photos taken. There’s a lovely shot of her with her father, Tony Taaffe, taken in the centre of the square.

And although the Liberties has become relatively gentrified since she lived there, there are still enough old residents there to keep people grounded, she says. On Sunday mornings the only sound you will hear are the bells of St Patrick’s and Christchurch. “There’s no through traffic so the place is blissfully quiet.”