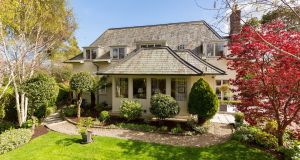 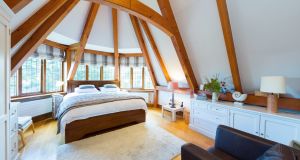 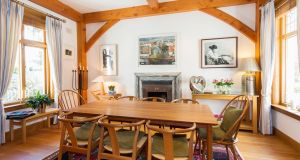 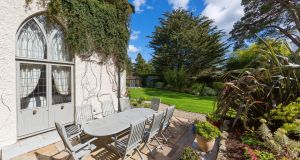 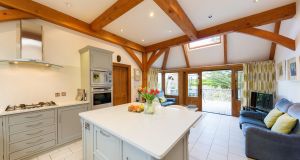 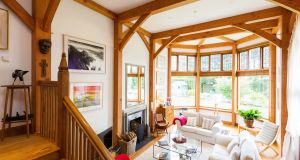 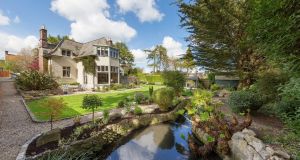 The world’s your oyster when it comes to building your own house, but architect Don Henihan had somewhere specific in mind for his clients when they came to him 15 years ago: Vermont. More specifically, he was interested in building a post-and-beam house, and to demonstrate that this would be something not only out of the ordinary, but definitely not of the log cabin variety, he arranged a trip to the North American state. The owner admits to some initial scepticism, but says that “as soon as we saw the first house, we were sold”.

Vermont is a famous skiing destination, and houses there need to be cosy, but a ski lodge isn’t exactly in keeping with the leafy avenues of Foxrock, so the next step was to adapt the design for its new location. On a sloped site, Vermont is a four-bedroom house, and while the dramatic wooden beams are a feature of its generous and stylish interior, the exterior pays a debt to the 19th century and the Arts and Crafts movement. As this was all about simplicity and honouring the timeless skills of craftpeople, it’s obviously a good combo.

Six months after the Vermont trip, two huge lorries arrived to Ireland from a specialist US company. “One with all the timber, cut to fit, and one with the insulation. It was a wonder,” the owner recalls. “People came to watch it emerge.”

The house, which is for sale with Savills for €1.745 million, sits on a secluded and private site, as if it has been there for 100 years, rather than just 15. The garden is bounded at one side by a stream that provides soothing sounds from the lawns, patio and deck. There’s gravel parking at the front.

Inside, a hallway leads through to a study to one side, but the immediate drama is all ahead of you, as the house drops down to the split-level dining, sitting and living areas, with large framing windows, and those lovely exposed wooden beams.

A pair of reclaimed marble bolection (Queen Anne) fireplaces make it all cosy in winter.

“The house really taught me to appreciate wood,” says the owner, noting too the bespoke solid oak doors and panelling.

The kitchen was custom made in beech by John Tuite, and there’s an island unit, plenty of storage, and separate utility room. French windows lead from the adjacent seating area to a raised suntrap deck.

Upstairs, the bedrooms have a serene quality, perhaps due to the vaulted ceilings. The master bedroom, which is en suite, is particularly dramatic, with a bank of windows at one end. It’s rather like a mini-cathedral to sleep in.

The fourth bedroom would be ideal for adventurous kids, as there’s a raised sleeping platform. The family bathroom is also up on this level, and there’s another wc below.

The current owners travelled to Vermont to discover something very different. You just have to go to Foxrock.

Fast Donnybrook flip with all the work done for €625k
9