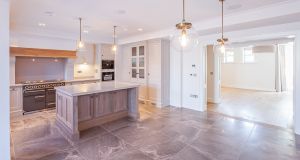 In 2015, Sligo-based solicitor Damien Tansey acquired 78 & 80 Merrion Road, a pair of stately red-bricks in complete disrepair, and subsequently set about undertaking a mammoth refurbishment and restoration of the two.

They are both now complete and Tansey is retaining them as high-end rentals. Number 80 has already found a tenant, prior to being advertised, and now 78 Merrion Road is available to rent at €13,000 per month and will in all likelihood be the best property to hit Dublin’s rental market this year.

Nicola Williams of Ballsbridge-based Bergins Estate Agents, who manage a range of high-end rental properties across Dublin’s best addresses, including Shrewsbury Road and Raglan Road, is managing the rental. Included in the monthly rent is the services of the landlord’s gardener, who will maintain the front and rear gardens throughout the tenancy.

The house has been refurbished to what Tansey describes as “London standards” and prospective renters will find it difficult to disagree with that claim, as the standard of finish and attention to detail is second-to-none. Accessed via a set of electric gates, the front garden of Number 78 has ample parking space and is well landscaped. The property’s facade has been restored and enhanced by the developer’s architect, Paul Brazil, and builders Whelan and O’Keeffe – a duo that has been involved in some of Dublin’s most impressive residential refurbishment projects of late.

The finishes throughout, including the carpets, window dressings, cabinetry and fixtures, are all top-notch. Tansey, who has a keen eye for design and a real passion for period properties, took great interest in the refurbishment and was involved in the most minute of details.

It’s not his first foray into property, having amassed a substantial property portfolio from a young age. By the age of 25, Tansey had already purchased three houses and that portfolio grew exponentially over the years to include significant commercial investments such as Apollo House on Tara Street. Recognising the madness of Ireland’s property boom, Tansey cannily cashed out of his property investments in 2006 at the market’s height, and subsequently waited on the sidelines for the right moment to invest again.

While he had hoped it would be sooner, that moment came in 2015 with his €5.5 million purchase of the Merrion Road properties and mews houses to the rear. Having experience developing residential properties in the past, such as his family’s own magnificent Donnybrook base and also properties abroad in Portugal’s Algarve, Tansey was unfazed by the prospect of practically rebuilding the two houses.

With his high-end rental houses now complete, the solicitor is turning his attention to developing two luxury apartment blocks in Ballsbridge. Behind Merrion Road, on Spafield Terrace, construction will begin shortly of a new block of nine exceptionally large apartments. The smallest, a one-bed unit, will be 65sqm, while seven two-bed apartments will range in size from 89-122sqm, all with additional outdoor space. Its 156sqm three-bed penthouse, with multiple reception rooms and a 52sqm outdoor terrace, has already received interest from locals looking to downsize. Tansey has also recently acquired 19 Pembroke Road for over €4 million.

He will convert and extend the existing period structure to provide 12 new high-end apartments, including two one-bed units (55-68sqm) and 10 two-beds (77-110sqm). Tansey plans to sell these apartments and is still actively looking for other development opportunities – but do not expect to find him building new estates in suburbia just yet, as his interests remain fixed on luxury boutique developments.

Number 78 Merrion Road extends to 510sqm (5,500sqft), and a set of steps lead down to what will undoubtedly be the heart of the home, an inviting family room complete with solid fuel stove, a separate utility room and a large open plan kitchen-dining room, which opens out to the rear garden.

If there is any drawback to this house, it would be the relatively small rear garden. It is, however, attractively landscaped and probably more than sufficient in size for the home’s target market – likely to be a top executive relocating from abroad to take up a role at one of the large domestic or multinational companies based in Dublin. Those relocating from cities such as London or New York are accustomed to having limited, if any, garden space.

On the first floor, a set of incredibly grand interconnecting reception rooms span the length of the house. These rooms are particularly attractive due to their high ceilings, large windows, period features, chandeliers and a set of Jamb fireplaces. A discreet wet bar is located off the drawing room, while the rear reception room features a fantastic custom-built library nook, with access to an outdoor terrace overlooking the rear garden.

Four-storey dwellings such as this are less common than their three-storey Victorian counterparts, but are in many ways more practical – especially when it comes to bedrooms, with a near-equal split between bedroom and living space. There is not a box room in sight, with five double bedrooms spread over two floors. The second-floor master bedroom suite is immense, spanning the length of the house.

Considering the home’s position on the relatively busy Merrion Road, there is one factor unexpectedly absent – traffic noise. The agent says that this was achieved through the installation of specialist energy-efficient glazing and insulation during the refurbishment.

Outside of Dublin, the rapid growth of Damien Tansey Solicitors, the Sligo-based practice headed by him and his son, has been the impetus for Tansey dipping his toes back into the commercial property market. Along with his three sons, he has recently acquired the substantial former ESB offices on Castle Street in Sligo, to be renamed Embankment House, which they are in the process of refurbishing and reconfiguring to accommodate a new cafe, restaurant and retail uses at street level and four office suites on the floors above – one of which will be occupied by the Tanseys’ practice upon completion.