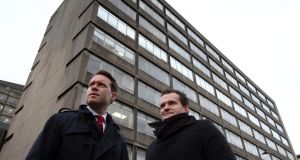 Since the surprise announcement last year of developer Greg Kavanagh’s departure from New Generation Homes, the company and its wide array of development sites have remained under the radar. With Kavanagh and former partner Patrick Crean going their separate ways, some of the duo’s assets have been quietly hitting the market after a failed attempt last year to offload a tranche of 27 valuable residential sites, dubbed Project Firefly.

One such property is a 0.35 acre site at the junction of South Richmond Street and Lennox Street in Dublin 8, which was picked up in 2015 when it came on the market through Ganly Walters on behalf of statutory receivers BDO. The site had been bought in January 2008 by Meath-based developer John McCabe for more than €9 million.

At that time, the site was occupied by a three-storey college building named Richmond House, which was later demolished. The site is on the market seeking €7 million. It has full planning permission for a four-storey over basement modern mixed-use building, comprising offices, retail and a gym.

Elsewhere two houses in sought-after Dundrum locations, Annefield on Taney Road and St Anne’s on Sydenham Road, whose gardens abut one another, were acquired for redevelopment for a combined €2.5 million in August 2014. The pair were unsuccessful on two occasions obtaining planning permission for the prime 1.8 acre site. The site was placed on the market in recent weeks without planning permission seeking €4 million, but it is no longer advertised for sale, suggesting it may have been sold.

Farther afield in Hollystown, Dublin 15, a house named Duinch that was acquired in January 2015 is back on the market. Sitting on 4.27 acres of land, the house (which was purchased for €800,000 according to the Property Price Register) formed part of an overall 8 acre site, on which the developers planned to build a mixed-use scheme. Fingal County Council and An Bord Pleanála both refused their planning application last year.

The decision to sell sites in a piecemeal fashion is a departure from the developer’s usual tack, however with Crean now alone at the helm, it certainly won’t be the only change.

There has been little in the way of activity since Kavanagh’s departure announcement, but in recent days Crean has registered two new companies, Asterdale and Belabridge, and his backers, M&G Investments, have registered a charge over the assets of his Marlet Property Group, which is believed to be the name that New Gen’s operations will continue under following Kavanagh’s departure.