Move your mutt with minimum stress

If you think moving house is stressful – what’s it like for your pets? Your dog can sense when something is changing, so give him extra attention to prepare him for the move, too 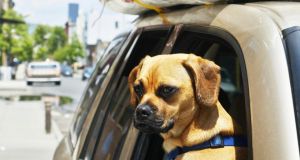 If the move is to a house in the same neighbourhood, it’s a good idea to take your dog there on as many as three walks before the move. Photograph: Thinkstock 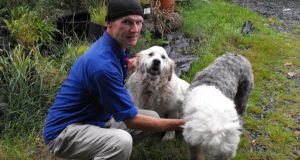 Moving house is all it’s cracked up to be: life- changing, stressful, a nightmare of arranging, sorting and decision-making. All this before you even get to the final farewells, take a last walk through the rooms and close the door behind you, forever.

You, hopefully, will at least know what’s going on, why you’re moving, what’s ahead. But what about the dog? It’s his home too. He’s protected it, kept strangers at bay, lived a life between its walls and now, with tensions all around and familiar things disappearing by the truck full, knows only that things are changin.

Dog psychologist John Hale, a man who knows a thing or two about canine emotions and needs, is adamant that dogs are given extra TLC and attention at the time of a move – for everyone’s sake. “Dogs sense when there’s a move upcoming,” he says, “and it could be the start of unwanted behaviour. They sense almost everything we feel, know how stressed or unstressed we are even before we do ourselves. This is true of all dogs. It’s what makes them so fascinating to us.”

Dogs took over, however, and he decided instead to use his knowledge to work with animals. He has made the study of dogs a lifelong affair and with his current dog, a springer spaniel, lives in Co Sligo.

His work involves trying to connect with the dog’s mind and natural instincts to help correct unwanted behaviour. His advice on helping dogs move house is solidly practical.

His first suggestion regards how far you are moving. If the move is to a house in the same neighbourhood, he advises that you take your dog there on as many as three walks before the move.

“Dogs are very sensitive to new environments,” he says, “and when the actual moving day comes, your dog will know that he’s been there before, be happier and prepared. If the people who own the house don’t mind, it’s also a good idea to walk your dog into the garden or on to the land.”

Don’t banish the dog outside when you’re packing. “Keep him in the picture, let him see what you’re doing. For dogs, it’s all about the energy we give off and moving is a very stressful time. It’s been said that, after people dying, moving is one of life’s most stress-inducing events.

“You wouldn’t wish it on your worst enemy so why wouldn’t you help your dog through it?”

If you’re making a long-distance move, familiarising your dog with the new environment may be trickier, “but you’ll be going to have a look at what you’ve bought, so why not bring the dog along?” John suggests. “Spend about an hour and give him a chance to explore.”

Once you have made the move, introduce your dog to the new house room by room. “Don’t let him wander around on his own,” Hale says, “he can’t be allowed to feel he’s in charge. It’s not his house. It’s yours.”

Hale also has advice – and an encouraging tale – for people who live alone with a dog and may find it hard to make friends following a move.

“A young girl wrote to me saying she had moved to an apartment off the M50 and was becoming isolated with her dog, losing contact with people because of her work hours.

“I suggested she set up a dog club and find an area where dog owners could come together to let their dogs off the leash and mingle. She found two acres of farming land outside a housing estate and, by charging a membership fee, was able to assure the farmer that the area would be maintained and looked after.

“There are about 50 members now and they’re hoping to create a small pond for the dogs to swim in. A dog club really is a good idea when moving to a new area. Keeping a dog alone in an apartment all day while you work is not ideal but a club certainly helps.”