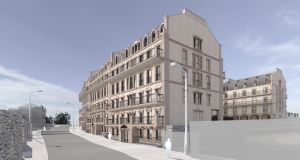 Mansion block-style apartments. One reason cited by developers for shunning apartments in favour of houses is due to the high upfront capital requirement

Four years ago developer Greg Kavanagh was propelled into the spotlight when it emerged that his company, New Generation Homes, had cannily spent a reported €100 million buying up housing sites at rock-bottom prices across Dublin. The total cost of the buying spree reached about €300 million by the time Kavanagh negotiated a reported multimillion payout from New Generations’s financial backers, which saw him exit the business in October 2016 to pursue other opportunities, retaining the New Generation trading name. Since then he has stayed under the radar, quietly working on various projects. However his latest venture, a large-scale housing development in Kilternan, south Dublin, is likely to land him back in the spotlight.

New Generation intends to submit a planning application this week in respect of a site beside the Golden Ball pub on the Enniskerry Road. Permission was previously sought and obtained for a low-density scheme on the site, featuring houses and duplex apartments, but Kavanagh has ambitions to build a landmark structure on about an acre of the overall five-acre site. Inspired by period architecture, including Dublin’s Customs House and London’s mansion blocks, 97 apartments across multiple six-storey blocks are planned for the site, which if granted permission would be the first phase of a large overall development of similar housing.

Many developers might contend that apartment development is not yet financially viable in Kilternan, but Kavanagh believes his plans benefit from numerous cost efficiencies, notwithstanding the costly features proposed, which include ornate natural stone exteriors, high ceilings and spacious interiors. In traditional modern apartment blocks, Kavanagh estimates that only about 84 per cent of the gross floor area constructed translates into net internal area, with the remainder comprising internal walls, lobbies, halls and other areas. Under the plans, there will be minimal hall space, with elevators opening directly into each apartment, leading to 95 per cent of the gross floor area being net usable space. This results in far larger than average apartments, with two-beds having a minimum 93sq m (1,000sq ft) of space and 90 per cent of units would be dual-aspect.

Another reason cited by developers for shunning apartments in favour of houses is due to the high upfront capital requirement, as there is often little scope to carry out development of an apartment block in phases. Under Kavanagh’s proposal, he states that self-contained blocks comprising about 12 units each could be built and sold in phases, which will vastly reduce the cost of finance and borrowing requirements, while undercroft car parking will be utilised to mitigate against notoriously expensive basement parking.

Swathes of large apartment developments similar in height to those proposed by New Generation have been built in formerly rural corners of Dublin 18 in recent memory, such as nearby Carrickmines Manor and Stepaside, thus the possibility of similar development spreading to neighbouring Kilternan now or in the near future is not inconceivable. Last year, politician Josepha Madigan was reported as stating that “over 1,000 homes will be delivered in Kilternan/Glenamuck by 2021, with a potential long-term delivery of 2,000 homes”.

Numerous housing developments are already in progress on adjacent Glenamuck Road, which is one of south Dublin’s development hotspots, and in the site’s immediate vicinity, namely Bishop’s Gate situated a few metres away, where buyers queued overnight last year to secure new homes, evidencing the shortage of housing stock in the area. Despite that shortage, many locals will undoubtedly oppose the development and query its appropriateness. Kavanagh maintains that, historically, even south Dublin’s coveted stock of period homes were built in locations considered rural at that time and would have been “out of place” in the same way that locals will no doubt consider his proposed development, named Golden Terrace, to be out of keeping with the current character of the area.

While their objections will be duly considered, the fate of Kavanagh’s landmark development ultimately rests with Dún Laoghaire County Council’s planners, who will decide whether to grant permission in coming months following receipt of the application. If granted, the development would surely appeal to both local Irish buyers and the fabled flock of London bankers planning to relocate post-Brexit, who may well take a fancy to the prospect of affordable London-style accommodation in suburban south Dublin.