Ireland’s revolutionary history lives on in a Leitrim schoolhouse

US couple purchased building where Seán Mac Diarmada was educated 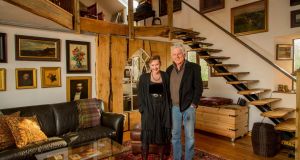 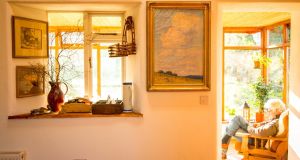 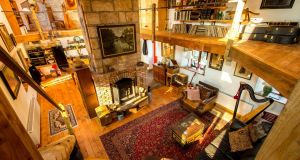 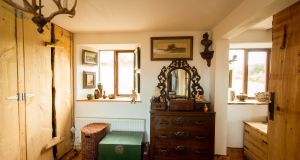 Much of the wood used in the interior of the house came from two western hemlock trees. Photograph: James Connolly 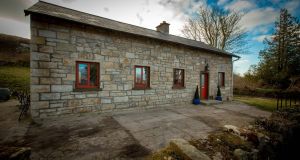 The exterior of the house was rendered white; renovation works uncovered the original stone facade and, inside, the fireplace that was contemporary to Seán Mac Diarmada’s time at the school. Photograph: James Connolly

On the road between Glenfarne and Kiltyclogher in north Co Leitrim lie the remains of two perfectly ruined houses, their stone walls crumbled, their roofs fallen in.

In between is a newly renovated bungalow of scrubbed stone and slate, the vibrancy of its presence at odds with the scene around it.

The grey plaque outside states that this is Cooracloona national school, established in 1891.

When it was purchased by American couple Brian Wright and his wife, Jane Chambless Wright, it had an ugly white render on the outside. To the passing visitor, it was an inconspicuous dwelling.

The Wrights had been on holiday in Killybegs, Co Donegal, two years ago when they realised that, with three grown-up children, they no longer needed to live in upmarket Westchester, New York, one of the wealthiest counties in the US.

He worked as a freelance advertising executive, she is an illustrator of children’s books.

“We asked ourselves, how much do we really need,” Wright recalls. The answer was, not a lot. They started looking online at places in Ireland and sent emails to all the estate agents involved. Only two responded.

“I don’t think investigating property purchasing by email is something that people are comfortable with,” Chambless Wright says.

The first property they looked at was structurally unsound; the second, in Leitrim, had been owned by an architect, which gave them the confidence to explore further.

When an engineer determined it was structurally sound, the Wrights decided to purchase it without ever setting foot in it. It was a gamble.

“It had been pretty much derelict for a while; it was in sad shape. We were able to find a wonderful team of craftspeople,” says Chambless Wright.

They sold their home in New York and moved to Ireland in July last year, much to the surprise of their builders who had not expected them so soon.

They rented two separate houses locally before moving into the schoolhouse in November.

“We kept telling the team that we had never met that we were coming,” says Chambless Wright. “I don’t think anybody believed that we really were.”

The house was gutted from the inside out and what was left was a big stone box.

It had been single storey so they renovated under the roof and put in a wooden balcony to create an extra living space upstairs accessed by a wooden stairs.

“We wanted it made [by] local crafts people and from local materials, nothing brand new and shiny,” Jane says.

The church window which is now the door to their bedroom came from McKenzie’s Architectural Salvage in Enniskillen.

It had come from an old Presbyterian church. McKenzie’s was also the source of the Bangor blue slates, which were used to replace the roof, the antique fireplace grate and the pine doors in the bathroom.

The kitchen, the stairs, the skirting around the loft, the sliding barn door, and the wardrobe doors all came from two western hemlock trees that were felled and sawn into planks at a sawmill just outside Florence Court in Fermanagh.

The floors were cut and processed in the lumberyard in Sligo.

The fireplace had been embedded in a wall and bricked up. Discovering the fireplace, which is in the same place as it was when Mac Diarmada went to school there, was like “finding the lost ark”, says Jane Chambless Wright.

The interior is all open plan and there is plenty of natural light from the sky light and a sunroom.

Brian Wright’s Irish connection came through his paternal grandfather, who had been in the RIC in Co Tyrone but left Ireland with his young family after partition. Wright’s father won the Purple Heart in the second World War serving in Saipan.

The couple knew nothing about Mac Diarmada before they bought the schoolhouse.

Mac Diarmada’s cottage, the only extant homestead of a signatory of the Proclamation, is on the far side of the hill about 3km away by road, but he would have walked through the fields to get to school.

Mac Diarmada was the 19th-century equivalent of a mature student. At the start of the 20th century, most children left school at 14, but Mac Diarmada stayed on for several years after that in a vain attempt to become a schoolteacher.

The Wrights were incredulous that a building associated with such an important figure in the Rising – most historians believe it would not have happened without Tom Clarke and Seán Mac Diarmada – had been let fall into ruin.

“Why wasn’t this on the historic register?” Wright says. “These are national monuments. In the US, they would have a big statue and all sorts of stuff going on.”

Since moving into the property, they have been reading up on Mac Diarmada, a tireless organiser.

Wright sees him as a visionary. That vision is reflected in the imposing statue in the centre of Kiltyclogher that shows Mac Diarmada looking in the direction of his old homestead.

“It is amazing to be living in the schoolhouse where he learned all about Irish history, where he spent six, seven or eight years studying to become a teacher,” Wright says.

“He knew they were going down, but from them would come a new wave of republicanism that would bring Irish freedom.”