Want to design your own contemporary extension?

‘Lego for adults’ lets you do just that; while alpaca blankets are a winter wonder 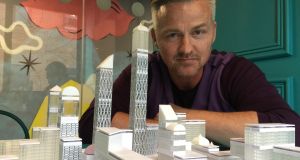 Have you ever wondered how your house would look with a curved contemporary extension – or, come to think of it, an ultra-cool modernist box – out the back? Now you can have a go at making a detailed 3D model – or even an entire imaginary city – courtesy of Arckit. This free-form modelling system of “click and connect” blocks, which has been described as “Lego for adults” or “real-world Minecraft”, is made in Co Wicklow. It was originally developed by the Irish architect Damien Murtagh as a professional tool for colleagues who were tired of struggling with scissors and glue, and found computer models unsatisfying – but when he launched it at the Grand Designs Live show in London three years ago, he realised that kids were having a great time building up the pieces, so he decided to expand his target market to include basic play sets.

Now there are Arckit sets to please just about everybody. The Tiny Town kits (€19.99 each) can be built as solo units or with each other, creating anything from a football stadium to an entire street. The Cityscape kits contain a larger number of components at €69.99; and the all-encompassing A360 (€290) will produce an entire Lord of the Rings-style model metropolis. Plus, after years of being available only from such far-off high-end retailers as MoMA and Guggenheim New York, you can now buy Arckit from stockists here in Ireland, including Eason, Art & Hobby shops, Arnotts and Toymaster, or order online at arckit.com

Alpacas are gentle but hardy creatures that live in the Andean Highlands of Peru. Their fleeces can be woven into a yarn that is hypoallergenic, naturally stain resistant and – thanks to tiny hollow pockets within the fibre – incredibly cosy. Which is why Audrey Brennan chose it for her gorgeous Ketzal range of blankets. They’re made, she says, “with the finest baby alpaca and feel as soft as cashmere but don’t ball or pill”. Plus, no baby alpacas are harmed in the process: the animals are shorn every 18 months or so, making this a totally sustainable product. Brennan’s first Ketzal collection is now available online in a palette of 12 colours from natural greys and beiges to nostalgic pinks and blues. They cost €325 for a single colour and €385 for a reversible two-colour version, and they’re shipped in a signature cream-and-gold gift box, making them a very good Christmas gift for anyone who needs a bit of pampering.
ketzalblanket.com

A bear for ballet

Bears may not be the most graceful of animals, but they are incredibly adaptable, resilient and resourceful. Which is why it’s appropriate that a bronze bear by the sculptor Patrick O’Reilly is about to dance into the spotlight and do some financial foraging – aka fundraising – for Ballet Ireland.

Along with Anish Kapoor and Tracey Emin, O’Reilly was one of a number of contemporary artists invited to participate in a recent auction at Sotheby’s of London to raise money for those affected by the Grenfell Tower fire. It was a huge success: the amount raised was well over £2 million (€2.2 million), more than double the expected estimate. O’Reilly has now donated a bear to Ballet Ireland, an arts organisation close to his heart. The sculpture, Marching On, stands 32cm tall and is made of bronze, with a 24-carat gold-leaf finish.

When it comes up for auction at De Vere’s next week, it will represent an opportunity to acquire a significant piece by one of Ireland’s most celebrated artists – and to support Ireland’s leading dance company at the same time. The auction is at the Royal College of Physicians, Kildare Street, on Tuesday at 6pm. Viewing today, tomorrow and Tuesday at 35 Kildare Street. All proceeds will go to Ballet Ireland.
deveres.ie

Bringing the bog into the business world is the inspired idea behind Showcase, Ireland’s must-see trade show for retail buyers from all over the world. The theme for  Showcase 2018 is Made/Slow, and all of the featured work is designed and made by small producers who live and work in Ireland’s most breathtaking locations. These companies don’t just take inspiration and local materials from their stunning surroundings; they also give back to their areas by providing sustainable employment through a combination of innovative design and traditional methods. Showcase, founded by the Design & Crafts Council of Ireland 42 years ago, is an international launch pad for the 450 Irish designers, manufacturers and craftspeople who unveil their new products there every year, many of them unique to the show. Among those taking part next year are Fisherman Out of Ireland, Ireland’s Eye, Avoca, Emblem Weavers, Cushendale, Mourne Textiles, Magee and Wild Cocoon.  Pictured here is Diem Pottery’s large jug (€65).  Showcase 2018 is at the RDS from January 21st to 24th. For further details of the event or to register to attend.
showcaseireland.com