Tribute to Caroline Herrera, a fashion icon who at 77 is still turning heads 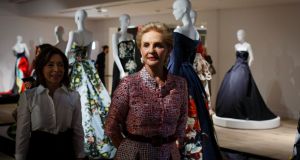 Caroline Herrera at her career retrospective at the SCAD FASH Museum of Fashion and Film in Atlanta. Photograph: Dustin Chambers/New York Times 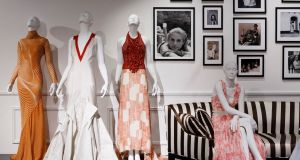 Exhibits at the Caroline Herrera career retrospective at the SCAD FASH Museum of Fashion and Film in Atlanta. Photograph: Dustin Chambers/New York Times

Carolina Herrera’s fabled life is one that is best captured in pictures. Over the years, the camera has caught her immaculate in tennis whites at her beach house in Venezuela; clasping the hand of a youthful Mick Jagger on the island of Mustique; lolling on the beach in Majorca, damp hair slicked back, her lips in a sultry pout.

There are the glamour shots: Bruce Weber’s 2001 portrait in which Herrera kicks up her heels, and her ruffled skirt, at a party in Santo Domingo; Robert Mapplethorpe’s 1979 portrait of the designer in a veiled pillbox hat and gumball-size pearl earrings, looking every inch the movie siren; and the famous Warhol screen print, her eyes rimmed in turquoise, her expression serene.

Mementos of a life on the fly. Those images fill coffee table books, countless magazines and the silver frames that crowd her office, suggesting to a visitor that when the designer does finally appear in the flesh, she’ll be carefully sealed under glass.

No such thing. Herrera, as she is deferentially known in the trade, steps briskly into her Seventh Avenue office, dressed in a crisply tailored patterned shirt and buoyant knee-length skirt. She is animated, her staccato delivery as pointed and direct as it was more than three decades ago when she introduced the fashion line that would jump-start her career.

We meet on the eve of her departure for Atlanta, where a retrospective celebrating her 35 years in fashion is to be held at the SCAD FASH Museum of Fashion and Film, part of a joint exhibition with the SCAD Museum of Art in Savannah, Georgia. On view in the show, called Refined Irreverence, is the designer’s vibrant legacy.

But Herrera says she is not resting on her laurels. “I’m very competitive,” she says. “If you don’t compete, you’re not challenged enough. And if you think you are doing everything perfectly, then it’s time to retire.” Retirement is not on her agenda. There are gowns to whip up, parties to go to. And of course there is the legend to uphold.

Herrera first claimed attention with her extravagant evening dresses and wedding gowns, one of them famously worn by Caroline Kennedy. But well before 1981, when she hung her shingle on East 57th Street, she was a fixture on the international scene.

With her husband, Reinaldo Herrera, a Venezuelan aristocrat and newsman, she had secured a coveted spot at the intersection of fashion and society in a way that is almost unheard of now.

In spring last year, Puig, her parent company, appointed François Kress as the house’s chief executive. The announcement was swiftly followed by the replacement of several members of her design team with Laura Kim and Fernando Garcia, veterans of Oscar de la Renta and partners in the up-and-coming label Monse.

It was a turbulent period, during which she dismissed Hervé Pierre, her creative director of 14 years. She says of it simply: “It was time for me to change. He felt it, too.” She adds, “Sometimes in life, even if you’re sad about it, you have to move on.”

It’s a precept she learned as a girl on her family’s estate in Venezuela. There, she may have languished in what Hamish Bowles, a columnist for Vogue, has described as “a lost era of white-gloved propriety, where exquisitely turned-out ladies indulged in concours d’élégance for charity, attended dog shows and garden parties, and exerted themselves with tennis and riding.”

That wasn’t the future she chose. In the late 1960s, soon after their marriage(the second for Carolina Herrera, who wed forthe first time at 18), the couple embarked on what some may view as an extended honeymoon, flitting blithely from the VIP room of Studio 54 to Kensington Palace to visit their friend Princess Margaret; on to Paris, where they mingled with the Rothschilds; and to the south of France, as guests of Fiat magnate Gianni Agnelli.

Their outings were chronicled in the society pages, Carolina Herrera a showy fixture on the best-dressed lists. Fond of entertaining in their tuberose-scented Upper East Side town house, the Herreras gave intimate dinners that, from a current vantage, are the stuff of myth.

The designer’s intimate showings on East 57th Street were attended by the elite: CZ Guest, Doris Duke and Jacqueline Kennedy Onassis, a devout client. Her first show at the Metropolitan Club was, in the phrase of John Duka, then a New York Times fashion columnist, greeted by thunderous applause, “as thunderous, almost, as the ruffles Mrs Herrera showed”.

But in some quarters, those early collections met with stinging scepticism. During one of her maiden runway presentations, Carrie Donovan, then fashion editor of The New York Times Magazine, was heard to say, “It’s all a little matronly, don’t you think?”

More painful was the assessment of WWD chief John Fairchild, in whose eyes she was a dilettante.

“I felt vulnerable,” Herrera recalls. “I thought: ‘Why don’t they accept me? I’m working the same way as everybody else.’”

Her sensibilities shaken, she was given to placing nighttime phone calls to reporters she thought may have Fairchild’s ear, seeking reassurance, and murmuring hopefully, “I know you understand me.” Those uncertain days cast a long shadow. “Designers tell you they don’t read the reviews – it is not true,” Herrera says.

“Sometimes those reviews can open your eyes, but sometimes you say, ‘How unfair’. They did hurt me.”

Displayed on a series of alabaster mannequins are the red-carpet dazzlers: the cabbage rose-patterned gown worn by Lucy Liu at the 2013 Golden Globes; the red and black bustled faille Taylor Swift wore to the same event the following year; and the blush-tone slip of a dress, its hemline pooling on the floor, that Lady Gaga wore at the 2016 Producers Guild of America Awards.

When she strolled through the exhibition, Herrera says she was moved. “It was a dream that became a reality. I was left speechless.” What will visitors and fashion students glean from the exhibition? The designer considered for a beat. “They will see that the clothes are timeless,” she says finally. “And they will learn to persevere.” New York Times Service