The livingroom could be a Berlin club, the kitchen a Moroccan riad 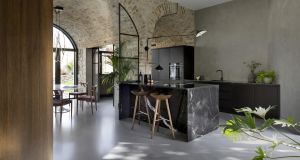 The property, a favourite project of designer Róisín Lafferty and her associate director Becky Russell, has been photographed by Barbara Corsico, and features a slew of fresh ideas that the magazine’s editorial team described as “unexpected elements” something they hadn’t seen before in an Irish home, Lafferty explains.

“We wanted to create a home that had both masculine and feminine aspects and to build on the existing character of the property’s stone and brick. The reason it is as beautiful as it is is the people that worked on it.”

Moore O’Gorman fabricated all the metalwork including the mirrors in the entrance hall and the reeded glass and steel internal pocket doors. The firm also did all the bespoke joinery including an ultra-feminine, undulating candyfloss-pink sofa that was covered by Portmarnock Furnishings, and the masculine, polished concrete floors in the dining area.

In one of the living rooms, the walls have been rough plastered to give them a distressed feel and then painted in a peacock green gloss paint from Fleetwood.

Elsewhere the kitchen has a central island that is the epitome of gender-neutral elegance. Tiled in blue zelig squares it extends outside to knit the indoor and outdoor areas into one slick space. Supplier Rocca Tiles describes this colour as “electric blue” on its website but it feels more like an intense and warmer shade of Majorelle blue. Cool concrete stools, sourced from Habitat, allow people to perch and the outdoor bench seating and patio are covered in the same Moroccan-style cement tiles from Best Tile Ireland.

It’s a sunshine blueprint that transports you to warmer climes.

The April issue of Architectural Digest Italia is now on sale.

Is my drunken, abusive husband capable of change?
6

Make this Stepaside brunch venue part of your weekend plans
7