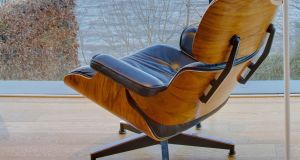 A lounge chair designed by Charles and Ray Eames. An original produced by the Italian company Vitra will cost thousands; a version is for sale through Voga at €895 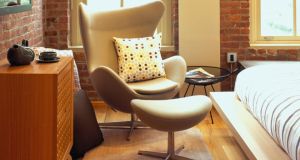 A replica of the iconic Arne Jacobsen Egg chair has a retail price on Voga of €799 compared with in excess of €9,000 for an original piece.

Furniture companies in the UK are upping sticks and moving to the Republic to circumvent strict new copyright laws introduced there which have – almost overnight – rendered it virtually impossible to make and sell replicas of design classics for up to 70 years after a designer’s death.

However such companies’ time here may be brief as businesses lobbying hard to keep the work of acclaimed furniture designers under copyright for longer look set to replicate legal moves in the UK by threatening court action here in order to force for the State to comply with an EU directive on copyright infringement.

The new rules in the UK have extended design rights to works created after 1957 from 25 years after their launch to a full 70 years after the designer’s death.

Another law under consideration in the UK at present would see iconic pre-1957 designs also fall under copyright protection and make it an offence to incorporate any element of particular products into new pieces without a licence.

While the rule changes are intended to protect designers or their estates, anyone looking to get faux-designer pieces on the cheap in the future may struggle and even interiors magazines might be hit with hefty fees if they print pictures of items protected by the laws without a licence.

One furniture company which has already moved to the Republic trades under the name Voga. It is based in Kildare and was prompted to move across the water because of the change to the British Copyright, Designs and Patents Act this summer which has made it illegal to sell replicas of iconic designs without acquiring an expensive licence.

Amongst its best sellers are chairs “inspired by” acclaimed furniture designers Charles Eames, Arne Jacobsen and Poul Henningsen. Jacobsen’s iconic Egg Chair has a retail price on the site of €799 compared with in excess of €9,000 for an original piece.

An Eames Lounge chair – which has turned 60 this year – would sell for close to €4,000 were it original but a replica can be bought for €895 on the site, while an artichoke lampshade by Henningsen that normally sells for more than €6,000 can be bought for no more than €370.

The company’s business model is to sell copies of classic designs for a whole lot less than full price and it now describes itself on its website as an Irish company. Under the law here it is “able to reproduce designs and sell replica furniture 25 years after its initial creation, which is exactly what we do. As a result, we comply fully with Irish law, making it perfectly legal to buy beautiful furniture from Voga.”

It also tells would-be customers from outside of this jurisdiction that it “is still 100 per cent legal to buy and import our products from our warehouse in Ireland, even if the copyright law in your country differs to that in Ireland. This is because you are not infringing any exclusive rights under local copyright regulation in other EU/EEA countries when you are buying replica furniture.”

So by basing itself in Kildare it can legally sell replicas to UK customers although customers do have to arrange for delivery to ensure they are not breaking the law.

The rule change in the UK was brought about as a result of a fierce lobbying effort led by Swiss design company Vitra which fought for UK copyright laws to be aligned with a 1998 European design directive that protects mass-produced furniture in the same way as as books, music and photography.

Vitra owns the distribution rights for original Herman Miller creations, including the Eames lounge chair and it claims the cheap replica market has cost it €250 million a year in the UK alone in lost profits.

The British Intellectual Property Office (IPO) initially planned to have a law come into force in 2020 to allow companies sell affected stock they already held without fear of penalties but Vitra successfully pushed for the law to be changed faster.

When the IPO fast-tracked the changes Vitra hailed it as a victory for the design industry. “We welcome the decision of the British government which mandates that artistic designs will soon fall under the same copyright protection in the UK as they do in other European countries.”

“This is long overdue in Ireland and I think we need change the copyright laws as soon as possible to better protect both designers and consumers ,” said retail and interior designer Helen Kilmartin who owns Minima, an interior design consultancy and store that represents many of the world’s leading furniture, lighting and home accessories brands, including Vitra. That Eames lounge chair is available from Minima which sources directly from Vitra. The price is not listed.