Decorator Ken Fulk creates interiors for tech royalty, including Napster’s Sean Parker and Bebo founders Michael and Xochi Birch. It’s his ideal job: since childhood he’s had ideas coursing through his head like movies waiting to be brought to life. So when a client asks for a unicorn, he’s okay with that 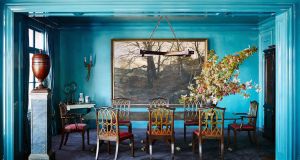 The formal diningroom at Birch Castle, which is painted in 20 coats of peacock-blue lacquer. Photograph: Douglas Friedman Photography 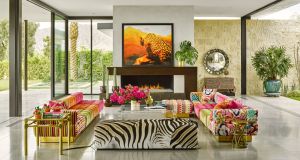 A Rat Pack-inspired house in Palm Springs which has custom-made sofas set on brass plinths and upholstered in Missoni fabrics and a zebra-clad ottoman, a signature print of Fulks. Photograph: Douglas Friedman Photography 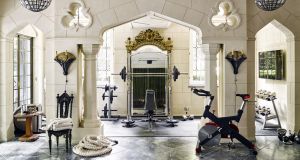 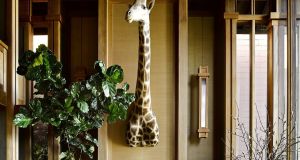 The livingroom of Fulk’s own Duncan House where he marries the idea of taxidermy with beautiful modernist features. Photograph: Douglas Friedman Photography 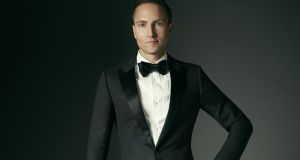 Ken Fulk, who conjures up parties and events at his Magic Factory: “The ideas ran like movies in my head that I then brought to life.” 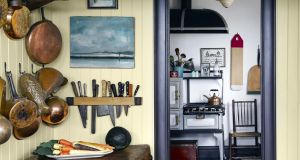 Silicon Valley has transformed San Francisco from a low-key hippie playground to a high-tech hub that is party central. The newly minted industry’s scions have money to burn and want to have a good time. So when they want to throw a party, decorate their home or even plan a wedding, who do they call? Ken Fulk and his Magic Factory is who they have on speed dial.

You’d expect someone used to dealing with telephone-number budgets to be, well, maybe just a bit obnoxious. Instead, he couldn’t be more charming; that, along with his talent, seems to be his secret weapon. In the narcissistic world of tech he comes across as really genuine.

“I’m the same person I was when I was six or seven,” he says. He just wasn’t your typical child. “From early on I orchestrated Thanksgiving and Christmas. I can’t say where it came from but I had determined that these special occasions really mattered. I was in charge of decorating. The ideas ran like movies in my head that I then brought to life.”

Growing up in rural Virginia, he was heavily influenced by what he describes as the “southern matriarchal society that cared about housekeeping and entertaining. How something looked was important.”

It’s an ethos he carries in his working life, one that sees him working on money-is-no-object projects. One client flew him to Provence in the south of France to view a property they were thinking of buying. Another couple, Michael and Xochi Birch, the founders of Bebo, one of the first generation of social networking sites, who had just sold it to AOL for $850 million, wanted him to turn around their block-long mansion in six weeks. He first met the English-American couple through the agent that sold them their house, for which they paid $29 million in 2008. It was at the time the most expensive property ever sold in San Francisco.

Fulk explained his working methods to them, casually noting that he collaborates with some clients while others like to be surprised. It was the latter option that appealed to the newly minted techies. They made only one request: that the mansion include an English pub. Fulk then suggested they spend a couple of months “camping” in the residence while he loaned them pieces of furniture of various styles to get a feel for what they really liked. They then departed for the UK and wanted the place finished when he came back.

A double sweeping staircase has been covered in a zebra print carpet. Elsewhere a gloriously grown-up bathroom in shades of dark grey has a neoclassical feel, while the formal diningroom wears 20 coats of peacock-blue lacquer – a labour-intensive technique that really only works if you use richly pigmented (read expensive) paint.

Another client took him to Palm Springs to view some houses and together they decided on a modernist house that Fulk pictured as having “all the swagger of a Rat Pack-era abode”. Even the bedrooms were themed; the Roy Rogers suite was an ode to everything western; another, the Sammy Davis suite, was clad in snakeskin and featured a gold lamé bed. The lounge featured a pair of Missoni-clad sectional sofas set on brass plinths with a zebra-print ottoman, complete with mane and tail, set between the seats – a not-so subtle Fulk signature, for the print also appears on the sweeping staircase of Birch Castle and other projects.

Fulk is also San Francisco’s party king. He organises the city’s most memorable events. When Sean Parker, founding Facebook president and Napster cofounder, first called he wanted Fulk to organise a party for his assistant. The timeframe? Two days. And he didn’t just want any party. He was specific about the theme, wanting it to be a unicorn-cum-prom night extravaganza. Not a problem, said Fulk.

Delighted with the results, which included a full-size unicorn (okay, a horse wearing an alicorn), the billionaire entrepreneur then hired Fulk to conjure up a party he was hosting at the World Economic Forum at Davos, Switzerland – this time with two weeks’ notice. “I turned a run-down disco into a post-apocalyptic ski lodge,” recalls Fulk, who remembers having to call premium Paris curiosity shop Detrolle and beg them to sell him the taxidermy models straight from the shop walls to execute Parker’s now-legendary party at which musician John Legend played a set and Mark Ronson took to the decks.

The third call from Parker was to organise his wedding. This time Fulk had a luxurious four months to pull this rabbit out of a hat. Together with his team of specialists at Magic Factory, a hangar-sized warehouse where dreams are realised, they conjured up a fairytale setting in a deserted redwood campground on the Big Sur coast, a thrilling 145-mile drive south from San Francisco on the Pacific Coast Highway. An army of stonemasons, woodworkers ironmongers and landscapers transformed the location in a fantasy fairytale. All 365 guests were given a custom-designed outfit by Academy Award-winning costumier Ngila Dickson, who designed costumes for the Lord of the Rings movie trilogy, to wear to the event.

After so many memorable events, he’s relaxed about throwing a party. “I try not to make things too hard,” he says sagely. “If you’re a great cook and love to cook then by all means cook, but if you’re not why not get a takeout and put on a beautiful display? People don’t care as long as the food is delicious.”

Give yourself permission to enjoy your own parties is his advice. “If you serve plenty of drinks and food people will have a good time – especially if you throw music into the mix.” He loves to make playlists, from classic jazz standards by Julie London and Dinah Washington to nostalgic and sexy tunes played at a recent 1983 party. “Every song felt like a perfect fit.”

Cabin fever: Why the humble garden shed is having a moment

‘I live alone, all my friends are married and the isolation is unbearable’

Emma DeSouza: ‘We were just two people who fell in love’
9

Skies without planes: what it means for the environment
10