Grand designs inspired by a night at the opera 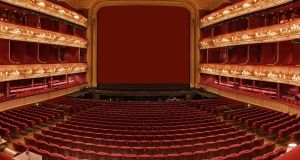 The local picture-house experience will get up close to the glorious production values and make you feel like you’re actually in the gilded and velvet-clad surroundings of Covent Garden.

In an era of visual overload, with Instagram and Pinterest feeds all communicating the same global looks to creatives the world over, it is becoming increasingly hard to find new sources of inspiration, especially for the home.

Savvy interior designers know this and have stepped away from their digital devices to go back to an artform that is more than 400 years old because the spectacle of an opera, in which musicians and singers perform a dramatic work within the confines of a stage, is a feast for the eyes as well as the ears.

The late Alberto Pinto’s decorating style owes a lot to opera’s drama, but fans of a more contemporary look also find inspiration there. American architect and designer David Rockwell, of the Rockwell Group, appreciates the spectacle and has won Tony awards for his set design. This creativity by the firm has also translated into its retail, residential and even nightclub projects.

Dutch designer Marcel Wanders, renowned for his innovative use of materials, is also a fan.

“I love the idea that you can take opera and bring it to the real world,” he said in his 2011 book Interiors for publishing house Rizzoli. His work turns hotels and houses into stages. The Mondrian on Miami’s South Beach is a tribute to Sleeping Beauty’s castle and shows just how his daydreaming can become a reality.

You don’t even have to travel to London to tap into this resource. A very affordable way to enjoy the visually arresting sets, lighting and costumes is to book a ticket to the Royal Opera House Live Cinema Season, which live broadcasts works from this season into about 1,000 cinemas across Ireland and the world.

The local picture-house experience will get up close to the glorious production values and make you feel like you’re actually in the gilded and velvet-clad surroundings of Covent Garden.

Robes and rituals abound and the 1,300 crucifixes used on stage have angered purists, but the maximalist set by Alfons Flores’s over-the-top aesthetic will tickle the taste buds of interioristas and is one of six performances you can watch to feed your imagination.

And it is inspiring to watch. “You get a special sense of occasion in the house because of the frisson of playing live,” explains Peter Jones, the company’s series producer, a man who was for many seasons the go-to name at the BBC for their Night at the Proms performances.

“The fact that there can be 100 people on stage, another 50 or 60 backstage and another 50 front of house makes the intensity extraordinary. There’s the noise of a theatre, a sense of event and anticipation,” says Jones.

“The visual storytelling creates a new experience culture that is bringing a whole new demographic, distanced and priced out of the London-based houses to engage with opera for the first time.”

As well as moving you emotionally, a night at the opera will give you fresh visual food for thought – something that is increasingly hard to find.

“It’s about trying to give you the best seat in the house and to allow you better access than you had ever thought possible,” Jones says.

Opera on screen: what to see

In 2017 Il Trovatore will be shown on Tuesday, January 31st; Madame Butterfly on Thursday, March 30th, and Othello on Wednesday June 28th