The famous Finnish poppies were designed as a protest 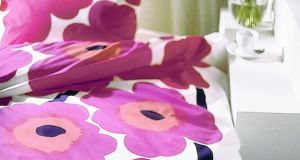 Marimekko was the result of the Finnish textle-printing company Printex extending its fabric designs across homeware and fashion in the 1960s. In 1964 Maija Isola drew the Unikko poppies

I have a handbag that I use in the summer; the fabric is the splashy red and white poppies instantly recognisable as Marimekko, and I thought it was rather smart until a friend, on noticing it was lined with plastic, pointed out that it is in fact a washbag.

I hadn’t made the connection, thinking the plastic was a very practical, indeed Finnish, touch to balance the zany colourfulness of the famous pattern. Called Unikko, it’s a modern classic that’s on everything from (actual) handbags to sheets and dresses: the Finnish company was one of the first in the 1960s to see the potential of extending the use of its fabric designs across homeware and fashion. Finnair even has a Unikko-patterned aircraft.

In 1949, Viljo Ratia bought Printex, a textile-printing company in Helsinki, and his wife, Armi, commissioned young artists including Maija Isola to design striking new colourful prints to lift the post-war gloom. There weren’t many takers until she had the idea of making clothes out of the fabrics, holding a fashion show and seeing whether they would sell. They did. Knowing she was on to something, she registered the name Marimekko and the brand took off, getting a firm foothold in the US in 1960 when Jackie Kennedy wore several Marimekko-print dresses while on the campaign trail with her husband John F Kennedy.

Those dresses were not made of Unikko – that might have been too startling – but they were bright and fun, giving off the required optimistic spirit. The famous poppies, now available in a bewildering range of colours, was designed in 1964 by Isola. By then she was one of the company’s longest-standing employees but she designed the rebel poppy pattern in protest.

Armi had directed that no floral prints were to be produced as they were too twee or too safe, and to spite her Isola went ahead and drew the startling and enduring poppies.