Big ideas for small spaces: how to uncramp your living style

From Dublin to Prague, Tel Aviv to Moscow, smart storage is the secret to living small 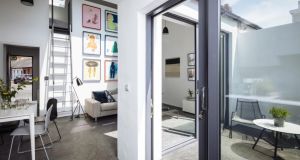 We all want to lead less cluttered lives and to inhabit spaces that look well ordered. Although some of us are better at achieving this than others, the secret to tidy homes is a well-planned space.

For Dublin architect Dave Leyden of LHA Architecture it’s about maximising light. See his recent reimagination of an artisan cottage on Gordon Street, in Ringsend, Dublin 4. The house originally had two small bedrooms and had been extended to encroach into almost all of its small but sunny, southwest-facing back. To increase the one-storey terraced house’s sense of space, he went up, building a double-height open-plan space to the rear and creating an internal courtyard by lining the L-shaped room with floor-to-ceiling glass to allow light to stream in.

While the overall square footage has been reduced, the house now exudes a sense of airy liveability – something its original warren of rooms didn’t have. By keeping the colour palette neutral and picking the same colour to use on the kitchen cabinets, splashbacks, glass door frames and windows, there is a sense of cohesion throughout. You could easily forget you were in the heart of the city. And on those rare nights you feel the need to escape from it all, there’s an attic space under the eaves, accessed by a docks-inspired ladder, where you can do a bit of stargazing if you get clear skies.

Small Houses Grand Living is a new book that focuses on small urban dwellings and offers fresh ways to work within those confines. “It’s about how to make living in those spaces attractive so you don’t feel like you’re living in a shoe box, says its editor, Caroline Kurze.

Kurze lives in a two-room apartment in Berlin that measures 50sq m. Her attempts to find a bigger space for her and her boyfriend that prompted the book. “It was and is really hard to find anything in Berlin, so we had to think about how we could make more of the space we currently live in.” Her answer is built-in storage. “It is what is missing most – it means storage for everything. If a place looks cluttered, it will always feel small. If you have proper storage you free stuff from lying around books and so on and visually you add space.

“The idea was to showcase spaces that appealed to families, couples and singletons – not just students – and that all the spaces were adjustable. In one story a family of four was living in one room, but because it had good ceiling heights, they were able to build a second bedroom at mezzanine level for the kids to sleep in.”

The book focuses on underutilised areas within the home, staircases and entrance hallways. One of her favourite homes is Nicholas Gurney’s Mighty Mouse apartment because, while only 27sq m in size, it feels quite open and spacious because all the furniture and belongings are stored behind panels. It is a flexible space that can be turned from living- to bedroom depending on your needs and the time of the day. “That’s key when living in a small home.”

She believes a home is not just a fashion statement. It needs an investment of money and time to make it the way you want it to look and feel, and you will still need to love it in three, five and even 10 years’ time.

It should also reflect your personality. “There is space for a piano if you really love to play the piano, but if you don’t there isn’t. There is only space for what is important to you, stuff that you are passionate about and use. If you don’t use it, give it away or sell it.”

In a Moscow flat of 60sq m (646sq ft), architect Vlad Mishin has divided the space using a bank of faceted plywood panels set into black metal framework to shut off the mechanical “rooms” of the home. Touch the panels and they move, pivot and undulate to reveal everything an apartment should have. The central two panels slide open to reveal a decent-sized kitchen. At the far end of the room is a door that swings open to access the bathroom. The wall opposite the yellow L-shaped couch features a wall that pivots to open through to the bedroom. It is a beautifully engineered idea that creates clean lines and means that if you’re not a neat freak you can keep clutter at least out of sight for most of the time in the bedroom.

2 Bedding down in the open

An L-shaped timber partition wall hives off space for two bedrooms in this 64sq m (689sq ft) apartment by Sinato in Kanagawa, Japan. The partition becomes a large piece of furniture on which you can hang a painting, store books on shelves and sit on its bench seating, which has deep storage drawers underneath. Behind the partition are two open-plan bedrooms divided by a concrete wall with light filtering through to the accommodation through the clerestory windows at its top. At each end of the u-shaped partition is an open doorway – the entrance to each bedroom.
sinato.jp

The bedroom of this 27sq m (290sq ft) studio apartment is part of a design by Australian Nicholas Gurney, who specialises in modest spaces for Oz’s fastest growing demographic: singletons. The Sydney home features a clutter-free bedroom thanks to its ceiling-to-duvet-level storage cupboards and a recessed shelf for books all hidden behind painted plywood panels. Below the bed are deep drawers. This bedroom is part of a timber pod that was inserted into the space with a sliding panel to close off the sleeping quarters when it is not in use. The pod also contained an entrance hall, bathroom and storage, and the apartment has been colour-blocked in the graphic shades of Mickey Mouse, a red bedroom, yellow bookshelves and a black kitchen.

In this open-plan space in Koriyama, Japan, architect Kotaro Anzai has installed drawers and pigeonholes into the ply and ash construction, using Japanese carpentry techniques to combine the stairs with storage. The owners house their kitchen crockery here, and helpful numerical handles quickly help them find what they’re looking for.

If your sleeping quarters have good ceiling heights, apply some boat-building techniques and install built-in storage at floor level, as architect Bogdan Ciocodeica did in this 42sq m (138sq ft) apartment in Prague. It also adds visual interest to the space. When closed it can be a platform on which to scatter cushions for seating. When open it offers a sizeable place for toys or bedding.

The studio of artist Sylvie Ye’arit Sheftel makes much use of birch ply to create a wall of colour-coded drawers to house the various materials the painter and photographer uses in her work. She lives in a studio apartment in Tel Aviv of 25sq m (270sq ft), originally designed by Israeli modernist Dov Karm in the 1950s. Raanan Stern and Shany Tal of Rust Architects reimagined the space for her, installing further drawers and shelving on the adjacent wall.
rustarch.com

In Moscow, Proforma Design built an open closet for the entrance hall of an apartment of 38sq m (409sq ft). The firm has taken a shop merchandising approach to the boundary wall of the flat, painting it a deep and restful blue and using wooden pegs to hang garments and keys and adding a shelving box for shoes, books and other stuff. A mirror set flush with the wall is useful for last-minute check-ups and also helps reflect light into the space.
proformadesign.ru

The en-suite bathroom in this Spanish apartment, designed by Elii, is set under the eaves. A tiled area, home to a sunken bath, demarcates the wet area, while in the rest of the attic space, secret storage has been set into the unused volume between the rafters to open and reveal extra horizontal “cabinets” in which to stock toiletries. A second cabinet, to the fore of the toiletries cabinet, opens to reveal a make-up mirror set on to its inverse. To use you have to kneel into the space and pout. It won’t suit everyone, nor will it conform to building regulations, but your teenager will love it.
elii.es; imagensubliminal.com