Best in Class: The Look of the Irish

While the world celebrates St Patrick’s Day, these designs will make you feel right at home 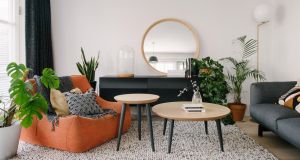 Check out these crafty baskets

Veteran basket maker Joe Hogan’s work has very humble beginnings, going back to when people used rods from a willow cluster or sally garden, something you used to see around the smallest of rural homesteads. A opportunity to learn the craft took him to Mallow, Co Cork, but when that fell through he sought out two brothers, Tom and Michael Quinlan of Tallow Hill, Co Waterford, who also also worked in fisheries.

“I’d bring the baskets I’d made that month and the more I did that, they more they felt I wasn’t a fly-by-night and would make suggestions. The following February they gave me a carload of cuttings.” It was to be his first willow bed.

That was 1977. Fast-forward 40 years and he now makes what he calls functional work – including the skib, a Co Galway flat basket style – to order, with prices starting from €70, but his real talent lies in how he has brought a sense of sculpture to this humble craft. The complex forms he creates by knitting found woods such as drift and bog with his beloved willow caught the eye of the judges of Spanish luxury fashion house Loewe’s craft prize. He is one of 30 finalists selected whose work will be displayed at London’s Design Museum from May 4th, when the winner will also be announced.

“Repetition is a huge part but every now and then you have to come up with a few ideas to keep the joy in the making,” he says modestly.

“I just applied, same as everyone else,” he says of the Loewe Craft Prize. His entry, Homage to a Tree, is a big piece, 1.7m in length, made of rods and bog wood. Such gallery work costs €5,000 and can be ordered directly from Hogan.

The Loewe Craft Prize is conceived by Loewe’s creative director, the Co Derry-born Jonathan Anderson. Hogan is one of two Irish talents flying the Irish design flag; the other is Amsterdam-based ceramicist Deirdre McLoughlin. Both are competing for a whopping €50,000 in prize money.

“While it’s never been about the money, it is a luxury to be able to do what I do,” he says. In 2006 he got a bursary from the Crafts Council (now the Design and Crafts Council of Ireland). “Not to have to worry about money was a huge privilege. It gave me six months to do something that might or might not be commercial.”

Donna Bates grew up on a dairy farm in Co Derry where her family had 100 head of cattle. She studied civil engineering, but changed to design, and found her calling when she launched Parlour Lighting – inspired by the overhead lights in the family milking parlour – at Clerkenwell Design week in 2013. More recently she’s been working with wood-turner Mark Hanvey to produce the Dunnyneill mirror, which comes in two sizes: 60cm (about €219) and 100cm (€639). Using the off-cuts from it she has just introduced a set of side tables, another farm-inspired design she’s calling cow (85cm diameter, €599) and calf (48cm in diameter, €295). Each has Friesian black legs. The Parlour light is now available as a table lamp and comes in two sizes: small (38cm tall, €330) and large (58cm tall, €532) as well as in pendant form, €655. The collection is available to buy from Belfast-based Maven, an independent shop that also champions weavers Studio Donegal and ceramicist Derek Wilson, a local designer with an international reputation, and one of the country’s most esteemed makers.

Two years ago furniture-maker Simon Doyle was named as Future Maker of the Year by the Design and Crafts Council of Ireland. He has shown with the crafts council at Maison et Objet and the London Design Festival. His work, which is as understated as he is, includes Toro II, a very fine European oak dining table that your kids will fight over long after you’re gone, and Picnic Cluster, a picnic bench collaboration with Adrian Coen commissioned by the OPW that you can enjoy on Furze road in Dublin’s Phoenix Park. His most recent launch is this simple set of oak shelving. Made to order, the 200cm by 220cm by 32cm design costs from €3,800.

Situated on the pier in the fishing village of Downings, McNutt of Donegal has operated from this locale for 60 years – with a few breaks in service during our recessions. It spins some of its wool here in the Gaeltacht, and its newly launched hybrid throws combine linen and merino in a beautiful play of textile engineering to deliver a cloth that feels light as air. Weaver Paul McBride who has been with the firm since 1994, is charged with this delicate operation. Larger than the over-the knee standard throw, it measures 200cm by 150cm, it costs €134.95 from the Kilkenny Group, Donnybrook-based Rowell Design, Industry & Co, Drury Street and Bray-based Flanagan Kerins, Joyce’s of Recess and Millar’s Connemara, Clifden as well as the shop in Downings, which reopens for the season today.

Cecilia Moore’s sculptural forms ooze personality and look alive in a way that goes beyond the purely decorative. A silversmith who has also studied design, Moore creates one-off pieces that can be seen at this year’s RHA Annual Exhibition, her third time to make the cut. In her more recent work she’s been using an ancient technique called raising that transforms her covetable fat forms a few millimetres at a time. Her works will fit atop a mantle and look delightful when grouped together. She is represented in Dublin by So Fine Art and in Belfast by the Charles Gilmore Gallery.

Andrew Ludick’s colourful clay vessels look and feel decidedly hand-made, and that is a really big part of their appeal. The American-born Ludick continues to be inspired by African and Moroccan art, and that sunshine feeling is reflected in the forms, he explains. He has collaborated with Wexford-based hand-tufted rug makers Ceadogan and American homewares giant Crate and Barrel, and he’s just inked a deal with another much-loved American retailer whose boho interiors we can only buy online in Ireland. You can purchase his work at the Irish Design shop on Dublin’s Drury Street, the Lavit Gallery, Cork or Ludick’s own shop at the Estate Yard in Castlecomer Discovery Park, Co Kilkenny, a space he shares his wife, fellow ceramicist Rosemary Durr. The pitcher, pictured, costs €145. The vases, pictured, each cost €255.

A new direction for the company is its Secant lighting collection, one that saw the prototypes by Red Dot Award-winning Norwegian Daniel Rybakken debut at the Milan Furniture Fair two years ago. The floor light garnered a Wallpaper magazine award last year. The range is finally in production using aluminum fabricated by Total Precision Engineering in Tramore, anodised by Dublin-based Graph Engineering with industrial glass that is hand-cut by Dreoilin Glass in Dungarvan.

Founded by Gerd Hay-Edie in the late 1940s, Co Down-based Mourne Textiles came to prominence when its Mourne Check, a linen, wool and cotton mix, was used by British designer Robin Day for Hille in 1951. Day continued to use it during his 10 years designing for the brand. In the same period it was making couture fabrics for catwalk pieces including fabrics for Irish fashion designer Sybil Connolly.

The handwoven cloth is still made on the same Kentish looms that were originally imported to Rostrevor in the 1950s using colours matched from its original heritage palettes. Placemats in Cloud cost about €96 for a set of four and cushions in Mourne Stream cost €118 for 30cm by 50cm and €141 for 50cm squares. Mourne Stripe is another classic that fashion designer Margaret Howell has stocked for years. The company’s Milano rugs, a deliciously textured striped design made using uncarded wool, costs €1,350 per square metre and have been commissioned by private clients in London, Zurich and New York. Its tweeds, made from Donegal yarn, and most recently seen this season in a gorgeous men’s topcoat by SEH Kelly (about €686), are perfect for upholstery and cost €203 per linear metre. Buy online from the studio.

Former models turned PR partnership Francie Duff and Sonia Reynolds founded Stable of Ireland as a modern Irish gift brand. They’ve opened a shop, housed in Dublin’s Westbury Mall, that sells covetable tweeds, wools and a range of utterly modern linens, most notably washcloths and hamam towels (bathtowel €120, hand towel €60 and washcloth €20), made using huckback patterned linen woven in Ireland and lauded for its highly absorbent, quick-drying and anti-bacterial properties. The girls have been known to use them as wraps too on holidays. The natural and Atlantic blue colour options, will work in both contemporary and traditional settings, and the range has been bought by Rescue, a swish day spa with establishments in New York and Philadelphia.

Wexford-based Ceadogan rugs make hand-tufted designs and have championed several talents including fashion designers Helen Steele and Helen Cody, potter Andrew Ludick, London-based textile designer Claire-Anne O’Brien, and many artists including Mainie Jellett, Patricia Murphy and Maree Hensey, whose work can be seen in the lobby of the Exchange Building in Dubin’s IFSC. Ceadogan’s works are also easy to hang on walls and offer decorative solutions that also dim down sound. The firm will provide wall brackets to drill to the wall as well as industrial-strength Velcro to attach the rug to the brackets so its sits flush with the wall. Prices start from €9,540 upwards and then vary depending on design and size.