Ashford Castle to sell off more contents at auction in Cong

Included in the 1,000 lots being sold as the Mayo hotel refurbishes are curtains, lamps and tables 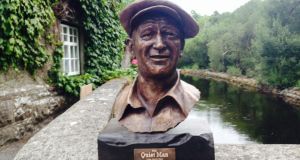 Included in the sale is a bronze bust of John Wayne

On July 23rd last year almost 4,000 people streamed to the quaint village of Cong, Co Mayo, in the hope of picking up a piece of Ashford Castle’s history. Now, following the completion of the final phase of the Castle’s lavish restoration, general manager Niall Rochford says it will hold a second auction of castle contents. Taking place this Saturday and Sunday in Cong it will include artefacts and items that were in the Castle for years.

Auctioneer Aidan Foley says there was a big demand for curtains at last year’s event with some pairs fetching €4,000. “It was the fabric that bidders were after, as many of these lines are discontinued and quite rare,” he says.

Included in the 1,000 lots are curtains and quality hotel furnishings; bedside tables, lamps and occasional tables. “There are also a large number of re-framed antique prints and old maps,” says Foley, “and of special interest are rare Bartlett prints and very early copies of cartographer John Speede maps.”

Also for sale is a life-sized bronze bust of John Wayne. Cast from the original mould used by sculptor Mark Rode to create the figure that stands in the village – in memory of the 1951 film The Quiet Man, it is being sold by the village committee to raise funds for local activities in Cong. “The main antique dealers in the country were here last July and the most expensive item sold was a marble-topped table (€5,000),” says Foley.

The no reserve auction takes place on Saturday and Sunday, Feb 7th and 8th at the Sawmills in Cong. Viewing on Friday 6th, and online at irishcountryhome.com.