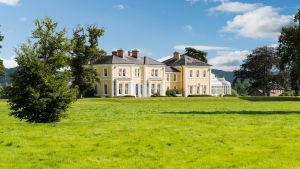 The background to Rocketts Castle estate, near the model town of Portlaw in Waterford, reads like a rollercoaster novel with land grabs, lost fortunes, Russian tycoons and polo clubs.

Dating from the 13th century, the original fortified round tower, overlooking the wide sweep of the river Suir on the edge of the estate, was built by a Norman family named Rockett (or de la Rochelle). Years passed and the land was “taken over”– in the way of takeovers of that era – by the Earl of Ormond under King Charles I.

Later Cromwell passed it to Sir Algernon May who named the estate Mayfield, and in 1787 a Medlycott family bought and farmed the land with varying degrees of success until the 20th century. In 1861 they commissioned the house that still stands a few hundred metres from the original castle ruin.

So far so colonial. Fast forward to 1997 when the estate on 250 acres was acquired by a Russian oligarch. Following the collapse of the Soviet Union Valery Zakharenkov was involved in the set up of a company here to sell Russian aircraft and spare parts in Europe in partnership with a major Russian bank called SBS Agro. Zakharenkov’s tenure at Rocketts Castle only lasted eight years (his time in residence probably amounted to no more than three or four months in total), but his legacy suggests every waning Irish country estate could do with a passing oligarch to take it in hand.

The 1,068sq m (11,499sq ft) house was lavishly restored, and though it dates from the 19th century it is very much a 21st-century property having been extensively upgraded with a new roof, dry-lined insulation, zoned central and underfloor heating, insulated sash windows and new hardwood floors. The décor was completed by the American wife of the oligarch’s agent in Ireland. The estimated €700,000 spent on bespoke Waterford Glass chandeliers provides a small indicator as to the budget at her disposal.

But with all that wealth and intrigue came a certain secretiveness, and Zakharenkov certainly dialled up the “international man of mystery” persona. During his visits (arriving by Learjet to Shannon and transferring in two helicopters – one for family, the other for security) staff were cleared from the property so nobody could set eyes on him, and no staff member was ever allowed have friends or family visit the property. Zakharenkov’s vision was to make the estate entirely self-sufficient so he could literally live off its bounty should his pursuers eventually drive him to ground.

An abundance of duck, pheasant and partridge were introduced, a lake was installed and stocked with trout while land was converted for crops; he even started a piggery and built a very fine abattoir for the killing of meat for personal use. An underground network of cabling and pipes delivers water and electricity throughout the estate, dispensing with unsightly overground poles and cables.

When Zakharenkov moved on (to Louis Vuitton’s Paris townhouse by all accounts) the current owners Thomas and Rosemary Driver stepped in. The Drivers, who operate plant equipment, haulage and waste businesses in Waterford, are also extensive potato farmers, and Rocketts Castle with its acreage seemed a natural fit to extend the business.

“It was like walking into a brand new house in perfect condition. There was simply nothing to be done,” says Thomas, while dimming and brightening chandeliers and swooshing the vast conservatory blinds over and back at the flick of a switch. All very James Bond.

It is an elegant six-bed house with many fine details, including original cornicing, a frieze in the smoking room, decorative marble chimney pieces throughout, handmade kitchen units with Swarovski crystal door handles, four-poster beds that came from the Michael Collins film set, V’soske Joyce carpets and Colefax and Fowler furnishings. Aside from all this though, it’s a very liveable home of manageable proportions that clearly runs on wheels. Whoever buys can simply hang their hat and move in.

Sophisticated security is still in evidence throughout the estate, and the Russian’s ultimate ruse to outwit his advancing foes was that he only ever stayed in a beautifully refurbished stone fishing lodge adjacent to the main house. Unfortunately the original enclosed courtyard didn’t survive the restoration, but the five-bed lodge is in pristine condition, complete with sauna, a steam room (that latterly doubles as a snug during parties) and hot tub.

Apart from enjoying the house, the Drivers have been fine custodians of what are probably Rocketts Castle’s greatest attributes: its vast pleasure grounds. Located across the road from Lord Waterford’s substantial Curraghmore estate on 8,000 acres, Rocketts Castle sits in the heart of big country, and once through the gates it’s a world apart. The Drivers have nurtured every element of the estate’s hunting, shooting and fishing potential.

They founded and ran Rocketts Castle polo club from the fishing lodge, and the grounds are also home to Waterford polo club. An accomplished horsewoman who rode for the Irish eventing team, Rosemary introduced a hunter trial course throughout the estate, and the Waterford Hunt meets here regularly. The Drivers have also developed many rides and pathways through the estate’s 60 acres of picturesque woodland, while adding to the mature shrubbery where possible with as many species of tree as they could grow.

The estate’s upkeep has clearly been a passion. Thomas could extol the estate’s natural virtues all day, but he doesn’t need to, they are already in evidence. On a sunny autumn afternoon we see buzzards, dragonfly, red admirals, heron, duck, pheasant, and a water hen. The walled garden is in full bloom and the array of trees include monkey puzzle, copper beech, wild oaks and hazelwoods, and a magnificent stand of lime trees.

The Drivers are remaining tight-lipped about their next move (though it will doubtless have been meticulously planned). It’s difficult to imagine however what alternative could be an improvement on this pastoral oasis.

Rocketts Castle estate on 250 acres is for sale through James Butler of Savills for €6 million.

Restaurant meal kit review: A Spanish feast in the comfort of your own home
9