How do I tackle damp patches and mould? 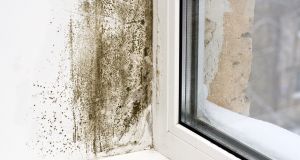 Damp attacking the wall at a window: a poorly heated house will naturally be more susceptible to condensation

Q. We have just bought a 1950s home and we are in the property now four months. We have been noticing damp patches and mould appearing on the walls around the windows, concrete floors and in the bathrooms. We didn’t notice it before we bought the property but I imagine it has been there for some time. How do you advise we get rid of it?

In some other cases, particularly with older properties, you can have inherent issues such as rising dampness. All of these are fairly common occurrences which affect the houses we live in.

However, notwithstanding the above, the symptoms that you are describing do not appear to fall within the typical/normal damp situation but rather are more symptomatic of an issue with condensation which gives rise to both dampness and mould growth.

Condensation is created by the environmental conditions within the house and is due to a combination of four different factors. The most significant one is the relative humidity or the amount of moisture vapour created within the environment. Everyday activities such as showering, cooking and, perhaps most significantly, drying clothes, within a house will give rise to very high levels of moisture vapour.

If this is not extracted from the environment, it can only dissipate throughout the house. This leads us to the second most important factor: ventilation.

Ventilation can either be by natural means, such as opening windows, or can be enhanced by features such as mechanical extract fans in kitchens and bathrooms. Clearly, if there are better levels of ventilation, the risk of condensation occurring throughout the house will be reduced.

The above three factors are relatively easy to control with minimum expense. In this respect, you should endeavour to reduce moisture-creating activities in as far as is practical, ie do not dry clothes on clothes horses in the house. You should ensure that good ventilation standards are provided by opening windows regularly and by ensuring that mechanical extract fans are used in bathrooms when showering.

You can also ensure that good levels of heating are provided, particularly during the colder months of the year, and indeed in colder parts of the house as this is where condensation is most likely to occur.

The fourth factor to consider is the issue of the insulation standard of the house. A modern, well-insulated building will clearly be easier to heat and thus will be less susceptible to condensation occurring.

However, a typical 1950s house would tend to be very poorly insulated and thus the risk of condensation occurring is much higher. It is our experience that condensation will occur around windows due to “cold bridging” (heat conducted directly to the exterior through a solid uninsulated element).

You will also find this in the colder rooms of the house, including unused bedrooms and bathrooms which tend not to be heated as well as the remainder of the house.

Also, with a 1950s building, the floor is unlikely to be insulated and as heat tends to rise, there will be a colder environment closer to the floor and so this zone will be more prone to condensation and mould growth.

By addressing the first three issues – controlling the amount of moisture vapour and the levels of ventilation and heating – it may be possible to reduce the condensation to an acceptable level. However, if the problem persists, you will have to look at upgrading the thermal insulation standard. Work of this nature, while beneficial in the long run, tends to be disruptive and relatively expensive.

Finally, I would point out that condensation tends to be more noticeable in the colder months of the year, from September to March, and this may explain why there were no signs of the problem when you bought the house four months ago.

Val O’Brien is a Chartered Building Surveyor and member of the Society of Chartered Surveyors Ireland, scsi.ie