The miracle of lilac: long-living, sweet-smelling and very easy to grow

Grow them as a shrub or small tree in a lawn, an informal hedge, or even trained against a high wall where their foliage will act as a foil for flowering plants 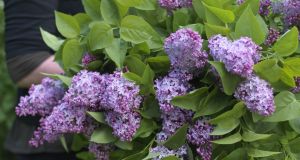 For centuries, lilac has been prized as a cut-flower. Photograph: Richard Johnston

What is it about a lilac in full bloom that so touches the heart? The poet and essayist Walt Whitman called this woody plant’s intensely perfumed flowers and heart-shaped leaves “a miracle”, the singer Paul Robeson wrote wistfully of “summer porches sweet with lilac air”, the novelist Alice Hoffman poignantly described its flowering as “that sweet green time when lilacs bloomed”, while our own Oscar Wilde wrote expressively of one of his most famous literary creations Dorian Gray “burying his face in the great cool lilac-blossoms, feverishly drinking in their perfume as if it had been wine . . .”

Over the years, I’ve snuck into stranger’s gardens and the returned-to-wilderness plots of tumbledown, abandoned old farmhouses to do the very same, irresistibly drawn by the lilac flowers’ lush beauty and haunting scent. In fact, these ultra-hardy, pollution-tolerant, deer-resistant, pollinator-friendly, easy-to-grow, deciduous shrubs or small trees – which can easily live for more than 100 years – are often found in parks, churchyards and old or neglected gardens, survivors of another age when they were the height of fashion.

Many of the oldest kinds, sometimes known as French lilacs, are varieties of the common lilac (Syringa vulgaris) created by the famous French lilac breeders Victor and Marie-Louise Lemoine, their son Émile and their grandson Henri. Over the years 1876-1953, the Lemoines gave the world a total of 214 different varieties of lilac, including the lovely, double-white flowering  S. ‘Madame Lemoine’.

A classic to this day, it’s suitable only for larger gardens as it grows into a substantial spreading shrub or small tree, eventually reaching an average height and spread of 4m-5m. The same is true of S. ‘Charles Joly’ (7m x 7m), another enduring classic from the Lemoine stable, with dense panicles of large, double purple-mauve, highly fragrant flowers in May and June, and S. ‘Firmament’ (large single blue, intensely scented flowers, 5m x 5m).

All of these varieties of common lilac do best in a sunny spot in the garden with a fertile, moisture-retentive but free-draining soil. You can grow them as a specimen shrub or small tree in a lawn, or as an informal, pollinator-friendly hedge, at the back of a mixed border or even trained against a high wall where their handsome foliage will act as the perfect foil for other flowering plants.

To extend their relatively short season of interest into the summer and early autumn months, plant any of the later-flowering Group 3 clematis (examples include Clematis viticella ‘Etoile Violette’, C. ‘Perle d’Azure’ and C. ‘Minuet’) at their base to clamber up through their strong, woody branches.

To keep these large-growing types of lilac floriferous and in good shape, make sure to carefully cut away the flowers very soon after they’ve faded, along with any suckers appearing at the base of the plant. Very mature, leggy, poor-flowering specimens can also be gradually rejuvenated over a period of years by using a pruning saw or strong secateurs to cut a third of the older branches right down to ground level in March, as well as any damaged, dead or crossing branches. Established lilacs also appreciate an annual organic mulch in early spring (5-7.5cm deep) around the base of the plant, but take care to keep it out of contact with its trunk/ branches.

While these older varieties of common lilac are prized worldwide for their large flowers, intense perfume and vigorous growth habit as well as their usefulness as a cut-flower, a new generation of lilacs has been bred for their slow-growing, compact habit, making them more suitable for smaller gardens.

Examples include the Korean lilac known as Syringa meyeri ‘Palibin’ (rose-pink scented flowers) which reaches a height and spread of just 1.5m; Syringa ‘Red Pixie’ (pink flowers, average height and spread of 1.8m); and the recently introduced, ultra-compact ‘Boomerang’ and ‘Flowerfesta’ series (available from mrmiddleton.com), both of which continue to flower intermittently throughout the summer and early autumn months after their first full flush of bloom in May-June has finished.

All are suitable for growing in a large pot or tub (use a John Innes soil-based compost rather than a peat-based type) but must be given a sunny spot and kept regularly watered as well as given an organic mulch in spring to keep them happy. Deadheading very soon after flowering is also important.

The ‘Flowerfesta’ series in particular is considered a real breakthrough in lilac breeding in terms of its compact but bushy growth habit (it reaches an average height and spread of just 1.25m), as well as its floriferousness  and its generous-sized flowers. Varieties include ‘Flowerfesta Purple’ (pale lilac), ‘Flowerfesta White’ and ‘Flowerfesta Pink’ (rose-pink).

Whichever kind of lilac you plump for, don’t forget that for centuries this glorious flowering shrub has been prized as a cut flower. So bring a few branches into the house so that you can drink in their heady perfume indoors. To condition them properly so they last well in a vase rather than wilting, follow the advice of another lilac lover and expert breeder, the late Fr John Fiala, the American priest whose book Lilacs: The Genus Syringa is considered a horticultural classic.

Yes, I know, it sounds like a bit of a faff but it’s so worth it to savour the beauty of these fleeting, intensely fragrant flowers of late spring close up.

In milder parts of the country, it should now be safe to start planting out summer bedding, but bear in mind that this has been an unusually cold May so keep an eye on the long-term weather forecast and have some garden fleece or even some old newspaper to the ready in case of a hard late frost. Placed gently over vulnerable plants in the evening and removed the following morning, it will protect them if temperatures do plunge. In colder parts of the country, hold off planting until the end of the month. Bedding plants are widely available to buy in garden centres, supermarkets and hardware stores at this time of year but some have been very poorly cared for while on display and are already badly under stress or damaged from lack of water or exposure to unsuitably cold conditions. Only buy plants that look healthy, happy and well-watered, with plump green leaves, as these will establish much more quickly and give far better results.

Take the time to hoe young weed seedlings appearing in beds and on paths before they establish themselves and form more stubborn root systems. Choose a bright, sunny day to do this to ensure the weed seedlings will die quickly (on damp, cool days many will survive and re-establish). Flame weeders are also much more effective when used on young weed seedlings at this time of year but always take care to keep the naked flame well away from flammable materials such as wooden edgings to beds or plastic weed-suppressant membranes. It’s also important to keep the flame away from tender young plant growth as it can easily scorch leaves and emerging flowers.

The darker side to Dublin’s history
9