Preparations for a polytunnel, from soil to seed trays – and don’t forget the hammock

Your guide to the best groundwork, equipment and plants to get started 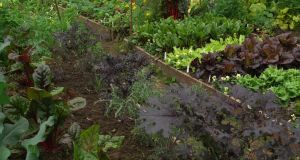 When it comes to fruit, container-grown fig trees and strawberries are a great choice for small tunnels while for larger polytunnels, consider grape-vines or cordon/espalier/fan-trained peach, apricot or nectarine trees, 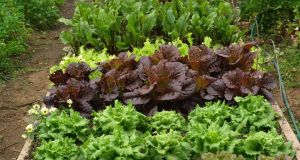 Vegetables that could, at a push, be sown now under cover in gentle heat and into modules to transplant into the polytunnel include mangetout and sugarsnap peas, micro leaves, lettuce and radishes. Photograph: Richard Johnston 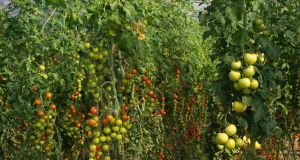 Hanging gardens of tomatoes in a polytunnel. Photograph: Richard Johnston

If you’re one of the many Irish gardeners who has joined the country’s merry band of polytunnel owners in recent months (see last week’s column), then you’re probably carefully debating your next steps. How, for example, should you best divide up that prized growing space? Would raised beds be a good idea? Paths? A potting bench? A small propagating area? What, if anything, can you sow or plant in it in late winter/early spring? And would a hammock be outrageous?

When answering any of these questions, there are a couple of key issues to bear in mind . Most important is the quality of the soil. If you didn’t get the opportunity to prepare the ground before your polytunnel went up, then now’s the time. If the existing soil is good, it’s a simple matter of digging out any stubborn perennial weeds, woody roots and large stones before covering beds with a generous layer of organic matter and a sprinkle of seaweed powder, all capped with a sheet of black or clear polythene. Peel this back in a couple of months and you should have a nicely friable, fertile growing medium ready for planting.

If, on the other hand, it is very stony, poorly drained or cloddy, then raised beds filled with imported top soil and the generous addition of manure/homemade compost or a sprinkle of seaweed are a great solution. These don’t need to be sharply raised (20cm is sufficient) or contained with timber edging, although the latter helps to keep adjoining paths clean.

Soil aside, the final layout and size of beds should be dictated by ease of access and cultivation. With small polytunnels, a single narrow central path (just wide enough for a wheelbarrow) with a bed on either side makes best use of the space. With larger tunnels, it’s best to have two paths.

As regards a heated propagation area and potting bench, try to position these side by side for ease of use. In my own polytunnel, the plug-in heated propagator is a simple homemade one positioned just inside the entrance (for detailed instructions on how to make one, see the February 2014 blog entry of quickcrop.ie). Simpler again, albeit more expensive, is a heated propagator mat whose space-saving advantage is that it can be plugged out and stored out of sight when not in use (available to order from fruithillfarm.com). On really cold nights, either can be covered with a homemade cloche constructed from clear polythene stretched over hoops fashioned out of flexible water pipes.

Other polytunnel essentials include a roll of good-quality horticultural fleece, (available from fruithillfarm.com) to protect young plants and seedlings from low temperatures.

Some sturdy seed trays and plant modules are also a must, as are some bags of good quality seed compost.

A compact notebook, with a hard waterproof cover is also recommended in terms of plotting, planning and recording the growing year. I love Moleskine’s range (available from eason.com) while others swear by Leuchtturm (available from designist.ie).

Now to the question of what to grow – when it comes to fruit, container-grown fig trees and strawberries are a great choice for small tunnels while for larger polytunnels, consider grape-vines or cordon/espalier/fan-trained peach, apricot or nectarine trees., but make sure to position these in a spot where they won’t cause shade. All can be planted now (see fruitandnut.ie).

Potatoes are another delicious homegrown crop that can be sown now into containers and temporarily placed somewhere frost-free. Moved into the polytunnel in February, they will be ready for harvesting months before their garden-grown equivalents. For detailed instructions, see the piece I wrote on this subject some years ago (iti.ms/2iVcAzP).

Aubergines are also well worth sowing now, but need good constant heat (about 20 degrees) to germinate, as well as careful protection from cold once they do so.

Other vegetables that could, at a push, be sown now under cover in gentle heat and into modules to transplant into the polytunnel beds next month include mangetout and sugarsnap peas, micro leaves (rocket, mizuna, mibuna), lettuce and radishes. My advice is to bide your time just a little longer in order to let both light levels and ambient temperatures recover from their winter nadir. The ideal sowing time will vary according to both your location and the meteorological peculiarities of any particular growing year, but the polytunnel sowing/growing schedule typically kicks off properly in February.

Finally, fruit, herbs and vegetables aside, make room for some hardy flowering annuals to use as cut flowers. Varieties suitable for January/February sowing and which will thrive in the protected environment of a polytunnel include sweet pea, antirrhinum and the annual larkspur (Consolida) seed, which is available from Mayo-based seedaholic.com.

And no, the idea of a hammock is not at all outrageous.

Get a march on the spring rush by collecting fallen leaves and hoeing weeds off paths and gravel areas. Remember that fallen leaves can be bagged and then stored somewhere cool and dark where they’ll gradually turn into leafmould, which makes an excellent mulch/addition to a homemade potting mix. Alternatively, fallen leaves also make a great carbon-rich addition to the compost heap. Most weeds do, too; just make sure to remove any seed-heads and avoid adding any perennial weeds with especially persistent roots such as bindweed.

There is still time to cover empty vegetable beds with a generous mulch of organic matter (garden compost/manure) and then a sheet of black or clear polythene (trench the edges in to secure it against strong winds). Not only will this kill off any opportunistic weeds, it will also help to protect and improve soil structure and fertility as well as gently raising soil temperatures in time for spring sowing.


Dates for your diary

Wednesday, January 18th (3pm), at the National Botanic Gardens Visitor Centre, Glasnevin, Dublin 9. Roger Casement and the Economics of Tropical Crops, a talk by Matthew Jebb, the director of the gardens. botanicgardens.ie