Even the smallest spaces can yield salad, peas, peppers and dahlias both pretty and tasty 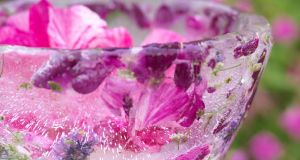 Short of growing space but still hungering to cultivate a little of your own food this year? Here are some useful suggestions for easy-to-grow, tasty and productive food crops happy to grow in a pot or hanging basket.

While you may not have the space to grow these tall climbing plants to the point where they’re laden down with pods, all parts of the pea plant are edible so you can still enjoy that delicious flavour of freshly harvested peas by soaking the dry, wrinkled seeds in water for a day and then densely sowing them into a shallow tray filled with just 3-4cm of compost.

Place somewhere bright but not too warm (a windowsill is fine). Within a couple of weeks, you should be able harvest young pea shoots (use a sharp scissors to snip the tips off). Tender, sweet and intensely flavoursome, these taste delicious in a stir-fry or added to a salad or even a sandwich. Recommended varieties include the sugar-snap variety known as ‘Oregon Sugar Pod’.

Very easy to grow from a packet of seeds sown directly in a pot or hanging basket at this time of year, this cheery, undemanding, fast-growing annual will produce an abundance of brilliantly colourful, pollinator friendly flowers throughout the summer and early autumn months.

Again, all parts of the plant – its flowers, leaves, seeds – are edible. You can use its nutrient-rich, tender, slightly peppery leaves to make a tasty pesto or tempura, scatter them on top of a pizza, or add to a mixed leafy salad.

Those zingy flowers are also really pretty added to a salad (sprinkle them onto it just before serving) or used in a homemade ice-bowl. For maximum production, choose one of the trailing varieties. This easy annual does best in low-fertility soils/spent compost. Recommended varieties include the trailing ‘Gleam Hybrids’ (available from Mayo- based seed supplier Seedaholic (seedaholic.com)

Yes, I know I’m a bit obsessed with these showy, floriferous plants, but with very good reason. Not only are their bewitching blooms drop-dead gorgeous but they’re also edible, as are the dahlia’s fleshy underground tubers, which can be used to make dahlia ice cream, dahlia crisps, dahlia chips, dahlia soup, dahlia rostis or even grated into cakes in much the same way that you might use carrots, parsnips or beetroot.

You can also use the tubers chopped and shredded in a salad (lightly steam them first) or in soups. Pot up the tubers within the next few weeks (available from most good garden centres) or buy as young dahlia plants, making sure to give them a fertile compost and full sun. One caveat: never eat recently purchased dahlia tubers as these could well have been treated with chemicals.

If ever there was a high-value, easy-to-grow, space-efficient food crop happy to grow in a container, then it’s culinary herbs. Take your pick of short-lived annuals such as coriander, chervil, dill, borage and basil (the latter is best grown indoors on a sunny windowsill), or biennial/ perennial types such as sage, parsley, mint and chives. Perennials are best bought as young plants while most of the more short-lived herbs can be easily raised from seed sown at this time of year.

Yet another highly productive and space-efficient crop ideal for container growing. Don’t bother growing varieties that are easily available to buy in your local supermarket but instead concentrate on especially delicious, colourful and hard-to-get varieties such as the butterhead heritage variety, ‘Wonder of Four Seasons’ (seed available from Cork-based ‘Brown Envelope Seeds, brownenvelopeseeds.com), making sure to sow fresh batches of seed every 2-3 weeks to ensure a steady supply.

While it’s far too late to raise chilli plants from seed, most good garden centres carry a selection of young plants at this time of year. Chilli plants hate low temperatures and low light levels, which makes them ideal candidates for a sunny windowsill.

Make sure to aid pollination by dabbing the flowers with a cotton bud or fine paintbrush and keep them well watered, while a fortnightly liquid feed will also boost yields. All going well, you should be able to start picking those fiery flavoured fruits by late summer.

Another delicious food crop that does well in a hanging-basket or container if you pick the right variety. For maximum productivity, concentrate on the cherry-types which produce a profusion of small, flavoursome fruits and will crop well outdoors in a sheltered, sunny spot as long as you give plants a good quality compost and regular liquid feeds.

While it’s too late to sow seed of this heat-loving annual, you’ll find young plants for sale in most good garden centres.

For more tips on growing in tiny spaces, get your hands on a copy of The Urban Kitchen Gardener by Tom Moggach (Kyle Books), James Wong’s Homegrown Revolution (Weidenfeld and Nicolson) and The Bountiful Container by Maggie Stuckey and Rose Marie Nichols McGee (Workman)

Traditional Inca food crops are becoming increasingly popular with Irish gardeners, who love the fact that they’re not just nutritious, tasty and versatile but also productive and relatively easy to grow.

This is a good time of the year to raise many of these typically heat-loving plants either from seed (examples include the golden Inca berry or Physalis peruviana, pepino or Solanum muricatum, achocha, and quinoa or Amaranth) or from tubers/ rhizomes (examples include yacon, Oxalis tuberosa and oca). Recommended suppliers include Cork-based organic seed producer Brown Envelope Seeds (brownenvelopeseeds.com), Mayo-based Seedaholic (seedaholic.com), and UK-based Real Seeds (realseeds.co.uk) and Territorial Seeds (territorialseeds.com), while Kilkenny-based Fitzgerald Nurseries (fitzgerald-nurseries.com) will also be supplying select Irish garden centres with young plants from May.

Sow into fertile, friable, moisture retentive soil as single or double rows, and give emerging seedlings careful protection against slugs. Rodents and birds are also fond of stealing the seed, so it’s worth covering the ground with fine netting/ chicken wire to prevent them. The compact varieties aside, peas typically require some form of sturdy support that will take the weight of the plants even when laden down with ripe pods.

As the weather gets milder, it’s terribly tempting to take a gamble on planting out tender summer bedding plants (such as petunias, pelargoniums, plectranthus, salvias and argyranthemums) but it’s important to hold off until mid-May at the earliest (and then only in milder parts of the country) as just one late frost could otherwise wreak terrible damage. In colder areas, wait until late May.