Mopheads and lacecaps: Hydrangeas hit the heights of gardening style

These shrubby plants have a chameleon-like quality that makes them look as much at home in a traditional country garden as in a chic city courtyard, and as happy in a formal planting scheme as in a naturalistic one 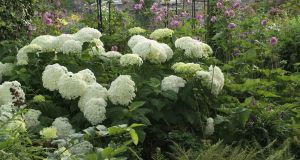 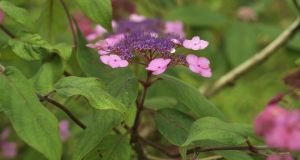 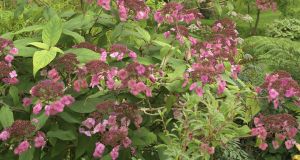 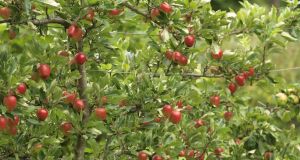 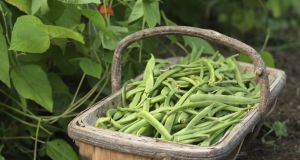 I feel as if I’ve spent the past few weeks coveting other people’s hydrangeas. I’ve covertly pulled up outside old farmhouse gardens to ogle “mopheads” covered with great flouncy blooms. And I’ve peeped into the gateways of smart townhouses to get a better look at the luminously beautiful flowers of ‘Annabelle’ or ‘Limelight’, two varieties particularly beloved of garden designers.

That, in a nutshell, is the wonderful thing about this genus of shrubby plants. They somehow have a chameleon-like quality that makes them look as much at home in a traditional country garden as in a chic city courtyard, and as happy in a formal planting scheme as in a naturalistic one. Plus, despite the seeming fragility of those large and stunning flowers, most species are capable of surviving a surprising amount of neglect.

Hence, you often see hydrangeas growing happily in abandoned gardens or flourishing in the sporadically tended plots of holiday homes long after everything else has succumbed to slugs or weeds.

These decorative, shrubby, deciduous plants are also long flowering – they typically put on a bravura floral display for several months beginning in summer and continuing right into autumn. Even after the flowers have faded, the ornamental seed-heads will remain to adorn the garden well into winter, or can be picked to use in flower arrangements.

And, oh how hydrangeas love our cool, rainy climate, especially species such as Hydrangea macrophylla, which hate their roots to be in dry soil.  Generally happy in sun or light shade, all these plants ask for is an averagely fertile soil and some shelter from strong winds.

That said, they are not perfect. For example, the aforementioned  ‘Annabelle’, which can grow to a height and spread of two metres or more, has a naturally floppy growing habit. The result is that its long, flexible flowering stems naturally droop under the weight of its impressively large, pale blooms, especially in damp, fertile soils. There is s no remedy for this, other than to stake the plant discreetly in late spring.

If you hate the thought of that, try growing the lovely ‘Limelight’ (lime-green flowers fading to cream, then pink), or the recently introduced ‘Wim’s Red’ (white flowers that eventually deepen to wine- red), both of which have sturdier stems and an upright habit.

‘Annabelle’ is a variety of Hydrangea arborescens, while Limelight’ and ‘Wim’s Red’ are varieties of Hydrangea paniculata. Both species are valued for their ability to tolerate dryish soils and less than ideal growing condition, which is why they do so well in parched city gardens, even shady ones. But that’s not the case of traditional mophead hydrangeas (Hydrangea macrophylla), which require a moist but well-drained soil in order to thrive. This is why you’ll see mopheads, or ‘hortensias’ as these are also known, flowering their blowsy hearts out in mild, seaside gardens, their giant, round blooms a common sight at this time of the year.

Depending on the particular variety, those flowers can be in various shades of lilac, cream, blue, pink or purple; some are even bi- or tricoloured. Soil acidity also affects the colour of some but not all cultivars, making them blue when grown in acid soils, but mauve in neutral soils and pink in alkaline soils.

Of the numerous varieties available, one of the loveliest is Hydrangea macrophylla ‘Madame Emile Mouillière’, whose giant, white blooms take on a shade of shell-pink as they age. Another is the recently introduced ‘Love’, with pale-pink/green flowers that gradually deepen to rose pink. If you want those proper blue/pink flowerballs, then seek out ‘All Summer Beauty’.

Lacecap hydrangeas belong to the same species (H macrophylla), but differ from mophead cultivars in the shape and arrangement of their flowers. So if you’re one of those gardeners who thinks mopheads are just that little bit “too much”, then the daintier lacecap, with its halo of larger sepals surrounding a lacy cluster of “florets”, is almost certain to please you.

Of the many excellent varieties available, the Swiss-bred, long-flowering ‘Teller’ series is especially good.

Other garden- worth species of hydrangea worth considering include Hydrangea petiolaris, which makes an excellent climbing shrub for a shady north-facing wall. It is notoriously slow to get going but long-lived once it does, producing lacy white flowers each year in early summer.

Meanwhile, for handsome foliage, you can’t beat H quercifolia, the oak-leaved hydrangea whose leaves turn to fiery shades in autumn. Its pale flower spikes appear in summer, gradually turning a soft shade of pink as they age.

And nothing beats the tactile pleasures of stroking the velvety leaves of Hydrangea aspera ‘Villosa, Group’. Its lacy, graceful, bee-friendly blooms that appear at this time of year – each one made up of a central cluster of tiny violet flower surrounded by pale-mauve flowers – are dreamily beautiful. A large shrub (height and spread of 3-4m), it needs a sheltered spot and a cool, fertile, moist soil to thrive.

Moist soil, you will agree, is not something Ireland is short of. Proving there’s always a silver lining even in all those rain clouds.

Weed seeds It’s that time of year when many weeds begin to generously set seed (just one shepherd’s purse plant, for example, can produce up to 25,000), so it’s well worth spending a few hours weeding flower borders and vegetable beds to prevent them doing so. Any weeds that have already formed seed-heads should not be added to the compost heap, nor should the roots of certain stubborn perennial weeds such as bindweed and Japanese knotweed.

Fruit trees If you grow cordon or espalier-trained fruit trees , now is the time to prune them in order to keep them in shape. For detailed instructions, see rhs.org.uk

Runner beans In the kitchen garden or allotment, runner beans are now producing generous crops, but keep harvesting them regularly. Otherwise, the beans will quickly get tough or too large, and production will slow right down. If you’re growing these decorative vegetables in a large tub, you also need to make sure to keep them well watered (runner beans are thirsty plants), while a weekly potash-rich liquid feed will also help maintain productivity.

Saturday, August 13th (11am) National Botanic Gardens, Glasnevin. Pond Dipping, a children’s workshop (suitable for ages eight and up), is organised with the support of the Dublin Naturalists Field Club. Explore the rich diversity of insects and “mini-beasts” to be found in the gardens’ pond. Admission free but pre-booking essential. See botanicgardens.ie

Wednesday, August 17th The Bay Garden, Camolin, Co Wexford, “Painting Day” with tutor Fergal Flanagan. The cost is €65, including lunch/refreshments and a tour of the gardens. Pre-booking essential. See thebaygarden.com