Gardens: an artichoke by any other name 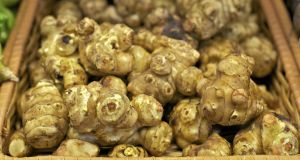 Just how and why some plants acquire their common names can be something of a puzzle.

Take the Jerusalem artichoke, a glaring example of a horticultural misnomer if ever there was one. Firstly, there’s the small matter of geography to consider: this vigorous, hardy, tuberous perennial (its Latin name is Helianthus tuberosus, but it’s also rather lewdly know as ‘fartichoke’ for reasons I’ll explain later) hails not from the Old City but from America, arriving in Europe in the 17th century.

Secondly, it’s no botanical relation to the true artichoke (Cynara cardunculus var. scolymus) but is instead a cousin of the sunflower, a close family bond evidenced by its tall, bright-yellow, starry flowers.

This, supposedly, is how the plant earned the first half of its common name, ‘Jerusalem’ being a corruption of ‘girasol’, the old French term for ‘sunflower’.

Pretty as they are, Irish gardeners don’t grow Jerusalem artichokes for those colourful blooms but instead for the plant’s highly nutritious, edible tubers which have an earthy, sweet flavour somewhat reminiscent of the true artichoke (here, finally, lies the plant’s tenuous claim to its common name).

Brown in colour and knobbly in appearance, these look not unlike oca, yacon and mashua, other tuberous food crops that are also increasingly finding favour with Irish gardeners.

A productive and easy-to-cultivate plant – some would say too easy – the Jerusalem artichoke will happily grow in sun or light shade and in most soils, quickly reaching a lofty height of 2.5m to 3m.

In fact, so tolerant is it of less-than-perfect growing conditions – the only soils it will struggle in are those that are very wet or very acidic – that it’s sometimes used as a way of breaking in ‘virgin’ ground in a new garden.

As for those knobbly tubers, gardeners typically start harvesting them now in late autumn, after the first frosts have arrived and the plant’s foliage takes on fiery hues before dying back for the winter. Just like parsnips, cold winter temperatures also improve the flavour of the tubers, which deteriorate quickly in quality once lifted, so only harvest as required.

To do this, cut the stems back to within 10cm of the ground before using a garden fork to gently dig the fleshy tubers up, taking care not to bruise them. While you could leave some in the ground to re-grow the following spring, this method tends to result in increasingly small tubers that are fiddly to clean and peel.

A better alternative is to set some of the fattest and smoothest-skinned aside , storing them carefully to replant the following spring. If you don’t yet grow the Jerusalem artichoke in your garden or allotment, then spring (from early March until late April) is also the best time to plant the tubers, burying them 10-15cm deep and 30-50cm apart.

Recommended varieties include ‘Fuseau’, a large, smooth-skinned, easy-to-peel variety. But choose the location carefully. Given this plant’s vigour and its famed ability to quickly colonise new ground and cast dense shade, don’t give it the choicest spot.

Do, however, pick somewhere sheltered as the tall stems can snap in a strong wind, just like those of its sunflower cousin.Some gardeners prefer to contain their Jerusalem artichokes in a large, deep tub, which is a good way of curbing the plant’s rambling tendencies, as long as you remember to water generously during the growing season.

Either way, the emerging stems will need protection from slugs, and should be earthed up in early summer when they reach a height of 30cm-40cm, much as you would young potato plants. To encourage production of large, fat tubers, you’ll also need to prevent it from flowering by pinching out the stems’ growing tips.

As for the best way to eat these nutty, knobbly tubers, the late food writer Jane Grigson (who was a great fan of Jerusalem artichokes) suggested using them in a delicious winter salad alongside prawns, chopped parsley and chives, as well as stewed, stoved (a combination of frying and steaming), chipped or pureed.

They can also be boiled, baked, roasted, stir-fried, used in cakes, fritters, souffles, rostis or soups, or even eaten raw (for example, grated into a salad).

But a few words of caution: delicious as they are, these flavoursome, nutritious tubers are also unusually rich in inulin, a plant starch that the human stomach can find difficult to digest. Some people’s digestive systems are especially intolerant, with the unfortunate result that consumption of the tubers causes, ahem. . . flatulence.

Or as Elizabeth David wryly put it, “Certainly they are provokers of wind in some insides. So be careful. A little and not too much, too often.” Hence the name ‘fartichoke’. Not such a puzzle after all.