Former poultry boss buys neighbouring Eglinton Road house, co-opts part of the garden, then sells it again at a profit 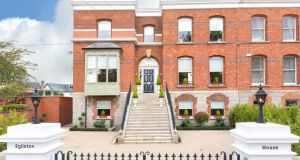 Eglinton House: Vincent Carton resold the home for a touch over what he paid for it after absorbing some of its garden

Hats off to Vincent Carton of Eglinton Road in Donnybrook, who has pulled off a coup following some creative property speculation on the prime Dublin 4 road.

The former boss of the Manor Farm poultry empire (recently sold for €70 million) decided to make his back garden bigger when he bought Eglinton House, next door at number 75, for €2.9 million in late 2017.

He did so by absorbing a portion of Eglinton House’s garden into the small triangle behind their own property. Then number 75’s remaining, still substantial garden was reshaped and landscaped, its interiors were spruced up a bit, and the house was put back on the market last October for €2.65 million – a fair price, it would seem, given the garden carve-up.

It certainly doesn’t seem to have diminished the attractiveness of Eglinton House, the early home of the late taoiseach Garret FitzGerald and his wife, Joan. The property was snapped within weeks for €2.96 million.

Allowing for the €58,000 in stamp duty Carton would have paid when he bought number 75 – bringing the total purchase cost to €2.958 million – he might even have emerged €2,000 the richer. But that would be mere chicken feed to him.