The Irish billionaire with 1,000 pairs of cufflinks 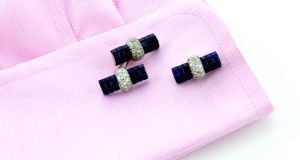 Pair of sapphire and diamond cufflinks made €18,650 at Sotheby’s in London 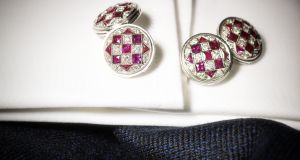 Pair of ruby and diamond cufflinks went for €6,752 at Sotheby’s 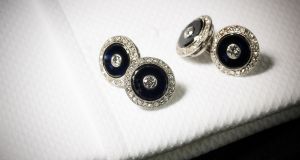 Onyx dress set and two pairs of onyx and diamond cufflinks €1,687 at Sotheby’s 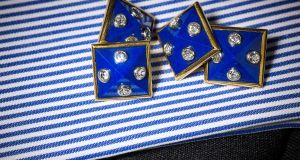 Pair of lapis lazuli and diamond cufflinks went for €3,658 at Sotheby’s 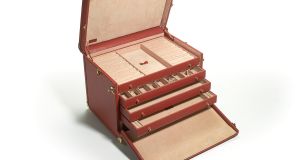 Bespoke, brass-mounted red leather travelling case, made in Italy and to store and transport Edward Haughey’s cufflinks went for €1,195 at Sotheby’s 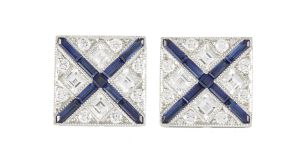 Pair of sapphire and diamond cufflinksfrom Tiffany at O’Reilly auction 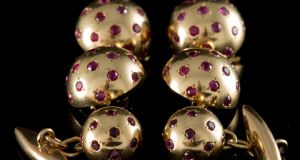 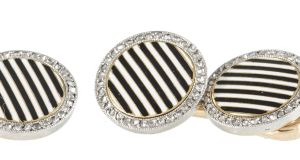 A diamond and enamel cufflink and dress stud set by Cartier, set throughout with rose cut diamonds for sale at O’Reilly’s auction 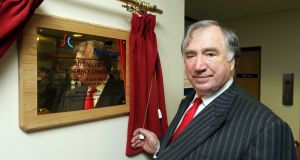 The late Edward Haughey, Lord Ballyedmond, pictured in 2012, unveiling a plaque in his honour at the Southern Regional College in Newry. Photograph: Kelvin Boyes / Press Eye

Money was no object for the billionaire Irish businessman who assembled the biggest-known collections of cufflinks which has come to light three years after his death.

The cufflinks collection was owned by the late Edward Haughey, the Northern Ireland pharmaceuticals tycoon also known as Lord Ballyedmond. At the time of his death, aged 70, in a helicopter crash in 2014, he was Northern Ireland’s richest man. He was one of just a handful of people ever to have been a member of both the Irish and British upper houses of parliament having been appointed to Seanad Éireann in 1994 (where he sat until 2002) and then to the House of Lords in 2004 when he was ennobled and acquired the title Baron Ballyedmond of Mourne in the County of Down, taking first the Ulster Unionist Party whip and later switching to the Conservative Party.

His family sold art and antiques from his mansion in London’s Belgravia to an auction at Sotheby’s in London earlier this year which realised more than £4 million (€4.5m). But Lord Ballyedmond’s huge personal collection of “Gentlemen’s Accessories” is being now sold in a separate two-part online auction. The first tranche went under the hammer last month; part two of the sale will take place in the autumn.

Sotheby’s described him as “an elegant man and discerning collector” and the sale includes cufflinks, tie pins and watches by great names including Cartier, Van Cleef & Arpels, Boucheron and Tiffany. The first part of the auction was a “white glove” event – meaning everything sold – that attracted global interest, with US bidders placing most bids, followed by the UK, Italy and Russia.

The highest price last month was achieved for a pair of sapphire and diamond cufflinks – with links of baton design set with calibre-cut sapphires and single-cut diamonds connected by chains, with French assay marks, dating probably from the 1950s, that made £16,250 (€18,650) – more than four times the top estimate (£3,000- £4,000). [See pic.]

Sotheby’s jewellery specialist Justin Roberts said the “exceptional” collection was so extensive, Lord Ballyedmond had commissioned a bespoke, brass-mounted red leather travelling case, made in Italy and “the size of three microwaves”, in which to store and transport his cufflinks. It also went under the hammer and sold for £1,063 (£700-£900). [See pic.]

Closer to home, some interesting cufflinks will be sold at the jewellery auction in O’Reilly’s auction rooms in Dublin’s Francis Street on Wednesday (July 19th). Managing director Michael Jordan said the sale includes some “good, desirable and collectible cufflinks” including: Lot 64: a set of ruby cufflinks and matching dress studs by Van Cleef & Arpels, domed studs and spherical bead cufflinks set throughout with round faceted rubies, mounted in 18ct gold estimated at €6,000-€7,000 [see pic]; Lot 223, a pair of sapphire and diamond cufflinks, with sapphires of approx. 1.00ct, diamonds of approx. 1.60ct, mounted in platinum, with Tiffany box and pouch €8,000-€12,000 [see pic]; and, Lot 240: a diamond and enamel cufflink and dress stud set by Cartier, set throughout with rose cut diamonds, in Cartier presentation case €7,500-€9,500. [See pic].

Mr Jordan said cufflinks are mainly bought by women as gifts for men to mark a special occasion but some are bought by men themselves “who want something that at a dinner party people will notice and say ‘Wow. Where did you get those?’”.

He said there are also some avid collectors in Ireland and there’s a “very healthy market” for Art Deco cufflinks from the 1920s and 1930s – platinum or white gold set with precious stones, particularly sapphires, rubies or old-cut diamonds; and, for the earlier, Victorian yellow gold shield- or oval-shaped cufflinks. Cufflinks were traditionally held together by a chain but these can be difficult to put on a without the assistance of a valet – hence the popularity, since the mid-20th century, of the simpler lever style.

As with all antique and vintage jewellery, he said the value is greatly enhanced if the original box or case and, ideally, the original receipt has been retained. Cufflinks were traditionally part of a full “dress set” for men’s formal wear consisting of cufflinks, shirt studs, and waistcoat buttons – widely used by upper-class men until the second World War. These are greatly sought-after by collectors but entire dress sets are hard to find intact as once a single piece was lost, as frequently happened, the set was broken up.