Smoking out a good investment in cigarette cards 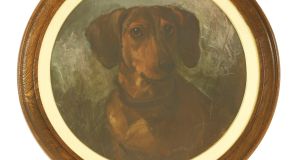 While tobacco packaging today features blood-curdling images, in an effort to steer smokers away from the addictive habit, this was not always the case.

In the early 1900s, colourful cards – sometimes created on paper backed silk, were used to stiffen packaging and advertise cigarette brands. Images were bright cheerful and pleasant, depicting everything from grinning movie stars to animals at play.

Famous sportsmen advertised the habit, considered de rigeur at the time, and some boxes pedalled the contents as a cure for asthma and bronchitis.

A set of 12 small oil canine portraits, dating from the 1920s and 1930s are the originals, from which hundreds of thousands of Gallaher cigarette cards insertions were copied, and will be auctioned on April 30th by Sworders auction house in Stanstead.

Begun in 1857, the Belfast-based Gallaher Tobacco was the largest tobacco factory in the world by 1896. Its continued success saw the company acquire brands such as Benson & Hedges, Silk Cut and Hamlet cigars until 2007, when Japan Tobacco purchased the company for £7.5bn, in what was then the largest foreign acquisition by a Japanese company.

The cards that came inside cigarette packets have become collectors’ items, with the Cartophilic Society of Great Britain having a special section devoted to them.

The most valuable cigarette card of all time is the T206 Honus Wagner – said to be the greatest baseball player of all time in the United States. Wagner, a non-smoker had complained when an American tobacco company used his photograph and ordered the company to cease, resulting in the fact that only 60 of these cards are said to exist.

In 1995, US giant Walmart purchased a T206 Honus Wagner card for $500,000, as top prize for a promotional campaign. This was bought and resold a couple of times, eventually selling in 2016 for $2.8m to Ken Kendricks – general manager of the Arizona Diamondbacks baseball team.

Another of these cards known as the Jumbo Wagner sold in 2016 for $3.12m making it the most valuable cigarette card in history. A group of nuns in Baltimore sold a similar card in 2010 netting $262,000.

The largest collection of cigarette cards was that of the late Edward Wharton-Tigar, who died in 1995, having amassed over two million cards in his lifetime.

A World War II spy within the Special Operations Executive in the United Kingdom, which specialised in espionage and sabotage, he financed much of the Allies cause through black-market trading in jewels and currencies.

He donated his collection of cigarette cards, including a T206 Honus Wagner card to the British Museum in London, where it lives in a small cardboard box in the Plans and Drawings Section.

The oil paintings on which the Gallaher cigarette cards are based belonged to the vendor’s father who was the marketing director for the Belfast-based tobacco company, when the series was first issued in 1936.

Such was their popularity that a second series of the cards on the theme was created just two years later. The complete set of 48 cigarette cards from 1936 is relatively common and today worth under £10.

However, these diminutive oils framed together in groups of three, are expected to attract attention.

Trios depicting a Welsh Springer Spaniel, Cumberland Spaniel and Cocker Spaniel and another comprising a Welsh Setter, English Setter and Dandie Dinmount terrier have estimates of £300-£500 each.