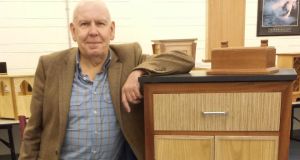 In advance of its annual fair at the RDS, the Irish Antique Dealers Association (IADA) in association with Johnston Antiques has announced the establishment of a bursary in memory of Paul Johnston.

Mr Johnston, of Killiney, Co Dublin, died suddenly in August. Mr Johnston was “the most outstanding of dealers” and a “world expert on Irish 18th and 19th century furniture” said IADA in a statement.

He “travelled widely, especially in the US, discovering pieces of Irish furniture which had previously been described as English and through his diligence many pieces of superb quality Irish furniture were repatriated to Ireland”.

The family business, established by his father in Dublin’s Francis Street 60 years ago, continues under the helm of his brother Chris Johnston. The photograph (below) shows the late Mr Johnston with a cabinet made by his son Andrew who is studying furniture design at GMIT Letterfrack .

The Paul Johnston Bursary will be awarded annually to the applicant who submits the best essay on an element of Irish Decorative Arts. The winner will be awarded €1,000.

The closing date is May 1st. For further information see iada.ie