Developer’s house and content sale bring in around €3.5million each and tee Irish artists up nicely for forthcoming Morgan O'Driscoll sale 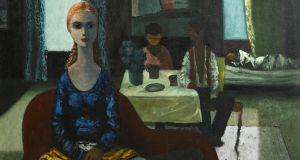 It has been a busy and successful week for the family of the late property developer Patrick Kelly.

His former home, the imposing and impeccably-restored Georgian town house at 44 Fitzwilliam Square, has been listed sale agreed within two weeks of being on the market with David Bewley of Lisney. It was seeking €3.5 million.

In London on Tuesday the contents of this property, which was restored by Kelly – who was an avid collector of Georgian and Regency furniture and art – realised in excess of £3.36 million (€3.77 million) against a reserve of £2.05 million (€3.16 million) through Sotheby’s.

Commenting on the price achieved, Arabella Bishop of Sotheby’s said: “It was considered at the time to be one of the best paintings of his [Scott’s] new work, and also has a lovely provenance from Martha Jackson’s gallery in New York, which was connected to the great Abstract American Impressionists.”

It certainly has been the year for Jack B Yeats since a record was set for the artist at Whyte’s Ernie O’Malley Collection sale last November, and the combined total for Patrick Kelly’s five Jack B Yeats’ paintings in this week’s Sotheby’s sale was £768,600/€857,863 (including premium).

At the Morgan O’Driscoll forthcoming online sale, which ends on Monday November 23rd, collectors will have another opportunity to bid on a work by one of Ireland’s best loved artists when Man Hearing an Old Song, a smaller work by Jack B Yeats measuring 9in by 14in goes under the hammer.

The painting, which is described as “an intensely moving study of the effects of music on the individual” by art historian Dr Róisín Kennedy, last sold through Adam’s of St Stephen’s Green in December 2016 for €36,000 against a €40,000-€60,000 reserve. This time the painting is listed at €60,000-€80,000, so it will be interesting to see the result after a four-year period.

Also in the catalogue is lot 38, William Scott’s Jug, a moody composition in black, grey and white from a private collection which is listed with an €80,000-€120,000 estimate.

It appears that almost every Irish art sale over the past few years features work by Paul Henry. Lot 18, Henry’s Maam Cross, Connemara, which is a scene painted at the crossroads between Leenane and the road to Cong, and perfectly captures the landscape at this time of year, is listed at €60,000-€80,000. It last appeared on the market in 2015 when it realised €52,000 through Whyte’s, so again is one to watch to see how five years could affect its value.

For a wallop of colour against the darkness in some of the listed works, is Robert Ballagh’s Inside Number 3 after Modernisation; a large oil and acrylic work which is a break from the minutely-detailed genre of his celebrated portraits (lot 52, €40,000-€60,000).