Mrs Lewisohn and Sir William Orpen are reunited in Dublin 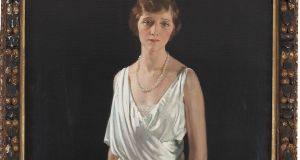 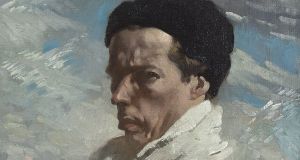 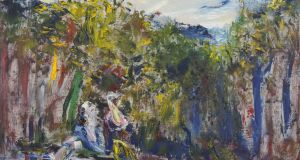 “Some of the finest work by some of Ireland’s best artists, to appear at auction in some years” is how managing director of Adam’s James O’Halloran describes the last major Irish art auction of 2016 – Important Irish Art and Irish Historical Documents – which takes place on Wednesday.

Viewing begins this afternoon at the St Stephen’s Green saleroom.

Orpen, who was born in Stillorgan, Co Dublin achieved great renown as a portrait painter in London and this painting is likely to attract much interest – and many admirers – at the viewing.

But if it seems vaguely familiar, that’s because it’s not the first time it has been on view in the city recently.

Now it’s back on the block again at Adam’s with a lower estimate.

But who was Mrs Oscar Lewisohn, formerly Miss Edna May?

Daughter of a postman

American-born Edna May was the daughter of a postman who became a major star, first on Broadway and then on the London Edwardian stage.

In 1907, she married Oscar Lewisohn, a New York banker, and retired from the stage. She outlived her husband by 30 years and died in Lausanne, Switzerland in 1948.

By happy coincidence, and a twist of fate, both Mrs Lewisohn and Orpen are reunited in this auction.

It was formerly in the corporate collection of paper products company, the Jefferson Smurfit Group [now the Smurfit Kappa company], which was sold off in London at Sotheby’s in 1996.

And Lot 76, a large watercolour by the artist dating from 1911, titled Sheep and Goats, Figures on a Cliff at Howth – which was last seen in public at the 2005 exhibition in London and Dublin called William Orpen: Politics, Sex and Death – is estimated €40,000-€60,000.

According to a catalogue note by Dr Róisín Kennedy “it has rarely been exhibited in public since becoming part of a private collection” and “belongs firmly with the other great epic paintings of Yeats’s late works”.

Like many of these paintings, it’s not immediately obvious what the painting depicts but, according to Dr Kennedy, it shows “a woman reclining in the landscape. She raises herself from the ground and extends her right arm in an exaggerated manner. She points towards a songbird which stands on the topmost branch of a tree, its neck extended and its beak open skywards as it fills the air with its music.”

Collectors who prefer the artist’s earlier representational work, as opposed to his later “abstract expressionism”, might prefer his watercolour, in Lot 71, A Sidewalk of New York.

The auction includes four paintings by Patrick Hennessy who was the subject of the exhibition at IMMA this summer (Patrick Hennessy: De Profundis) including Lot 42, a large oil-on-canvas titled The Bronze Horses of Saint Mark’s – a 1953 painting of Venice – estimated at €15,000-€420,000.

There are seven watercolours in the sale by Mildred Anne Butler, one of Ireland’s best female artists who died in 1941, including Lot 64, Pot Luck – showing a crow drinking from a discarded cooking pot.

For the full catalogue and online bidding details, visit adams.ie