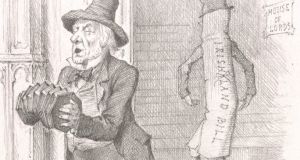 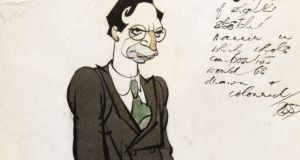 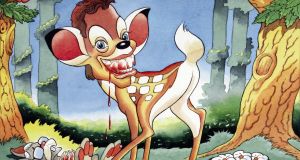 Highlights include an infamous cartoon of Tony Blair as ‘Bambi’ 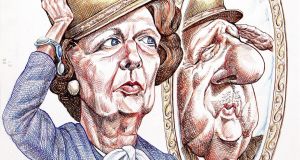 Lot 171, ‘Thatcher Mirrors herself on de Gaulle’ – a pen and ink with coloured pencil 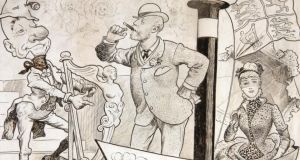 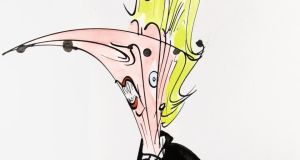 “Do collectors who start with one first edition, one Penny Black, or one Ferrari, have any idea of where it’s going to end?”

The question is posed by Jeffrey Archer in a catalogue note for the auction of his Political Cartoon Collection at Sotheby’s in London on March 14th. The writer and former politician began collecting cartoons over 30 years ago and has now decided to sell his collection – some 225 leading examples of the genre – with estimates ranging from £200 to £20,000 (€225-€22.5k).

Archer – also known as Baron Archer of Weston-super-Mare – is a former British MP and deputy-chairman of the Conservative Party whose political career ended in disgrace when he was jailed in 2001 for perjury and perverting the course of justice. But he is more famous as a best-selling novelist whose books, including Not a Penny More, Not a Penny Less, have sold millions of copies worldwide.

Now aged 77, he had, apparently, decided to donate his collection of political cartoons to a public gallery or museum but, he told Sotheby’s “that didn’t prove easy because so many galleries who showed an interest made it clear that it would be impossible to show all the cartoons at once and indeed the best offer we got was to place them in boxes so they could be studied by scholars”. He decided therefore “to put them up for sale, and give the profits to charity”.

Archer said: “I’ve had a life-long interest and fascination with politics, so putting this collection together has given me particular pleasure.” The collection is described as the best of over two centuries of an art form that seeks to record and satirise the world of politics.

Some of the cartoons are of particular Irish interest. Lot 9, estimated at £700-£900 (€786-€1,010), is a pencil-drawn cartoon that appeared in Punch magazine depicting prime minister Gladstone’s difficulty in getting the 1881 Irish Land Bill through the House of Lords.

Then, as now, Irish issues were central to British political life. The artist was the leading 19th-century illustrator Sir John Tenniel who was most famous for illustrating Lewis Carroll’s “Alice in Wonderland”. The cartoon alludes to legislation that had had been approved by the House of Commons, and gone up to the House of Lords, where it was suspected, not without reason, it would be considerably modified. The words Gladstone is singing are from a popular drawing-room song entitled The Forsaken. [see pic]

Lot 16 dates from 1885 and pokes fun at a royal visit to Ireland that year by the Prince and Princess of Wales (later King Edward VII and Queen Alexandra). The visit was arranged by the Viceroy in Dublin as part of misguided attempt to drum up support for the monarchy and undermine public support for Charles Stewart Parnell’s Irish Parliamentary Party. Although the royals were well-received in Dublin, when they travelled to Cork they were met by a hostile crowd and jeers of “No Prince but Parnell”.

Lot 69, is a pen ink and watercolour cartoon, dated 1929, of Éamon de Valera (then leader of the Opposition in the Irish Free State) by the English cartoonist and caricaturist Robert Stuart Sheriffs that was published in the magazine Looker On. The estimate is £400-£600 [see pic].

But most of the cartoons feature British political leaders. Highlights include an infamous cartoon of Tony Blair as “Bambi” which appeared on the front cover of the Spectator in October 1994. Lot 194, Has Bambi got Teeth by Peter Brookes, inscribed by the artist “With apologies to Disney”, is estimated at £1,500-£2,000 (€1.7k-€2.2k) [see pic]. Blair was elected leader of the Labour Party in 1994 following the sudden death of his predecessor, John Smith. Blair was just 41 years old when he became Labour leader, his young age earning him the nickname “Bambi”. He would become the youngest prime minister in 200 years when he defeated John Major in 1997.

There are many cartoons of Mrs Thatcher (who appointed Jeffrey Archer as deputy chairman of the Conservative Party) in the auction – including Lot 171, Thatcher Mirrors herself on de Gaulle – a pen and ink with coloured pencil, by Kevin Kallaugher (“Kal”) that appeared in the Economist in November 1983 (£600-£800); and, Lot 172, a pen ink and watercolours by Gerald Scarfe of the Sunday Times, simply titled Mrs T’ (estimate £3,000-£5,000, €3.4k-€5.6k) [see pics].

Who does Jeffrey Archer think might be interested in buying these cartoons? Well, back to his comments in the Sotheby’s catalogue where he says: “I can only hope that some other nutcase will buy one, and 30 years later will have had as much pleasure as I’ve had putting this collection together.”