Record week for Irish art and collectibles with over 8,000 lots auctioned 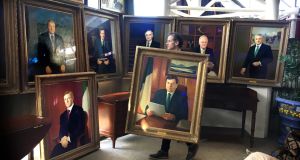 Niall Mullen, antiques dealer, carries a portrait of former taoiseach Brian Cowen at the Heritage Hotel in Killenard, Co. Laois. The suite of portraits of all the 13 former taoisigh sold for €37,000. Photograph: Bryan O’Brien

One of the busiest weeks ever in Irish salerooms saw a flurry of auctions at locations throughout the country with over 8,000 lots going under the hammer.

While there were no record prices, there was strong demand and over 6,000 lots were sold.

The top lot of the week was a suite of portraits of all the former taoisigh which sold for €37,000 (within the estimate of €30,000-€40,000) at the big two-day interiors auction run by Victor Mee Auctions in the Heritage Hotel, Killenard, in Portarlington, Co Laois on Monday and Tuesday (March 12th & 13th).

The paintings, Lot 2495, were sold by Dublin businessman Peter Dwan who said afterwards he was “absolutely charmed” by the result. The buyer, it subsequently emerged, was Dublin hotelier Louis Fitzgerald and the paintings are to be hung in the Arlington Hotel on O’Connell Bridge..

The large oil paintings, framed to museum standard, depict all of Ireland’s former government leaders from the first, WT Cosgrave, to the most recent, Enda Kenny. They had been consigned to the auction as the work of “J.W” – the initials for ‘Johnny Wilson’ - but that proved to be a pseudonym for Chinese artist Zhang Yi who had come to Ireland to study English and art in 2006.

Mr Dwan, who had commissioned the paintings, said the artist now lives in San Francisco and is willing to paint a similar portrait of the current Taoiseach Leo Varadkar, to complete the series.

Over 3,400 lots went under the hammer in the auction, organised by Dublin antiques dealer Niall Mullen who said 90 per cent of lots had sold including furniture, bar counters, light fittings, glassware and art from the former private dining club, ‘Residence’ on St Stephen’s Green, the former nightclub ‘Howl at the Moon’; furniture, chandeliers and curtains from the Shelbourne Hotel following the venue’s most recent refurbishment; and memorabilia from the former department store, Clery’s.

A cheque written by businessman Denis Guiney when he bought Clery’s out of receivership in 1941 sold for € 2,800 – almost double the top estimate of €1,500.

At the time he was on board a flight from Dublin to New York and “39,000 feet above the Atlantic and travelling at 537 miles per hour”. He availed of the Aer Lingus on-board Wi-Fi in what is believed to be the first ever bid in an Irish auction from a flight. Mr Hogan, who described his bid as “Wi-Fi in the Sky” was known for his 1980s Dublin traffic reports, ‘Eye in the Sky’ broadcast from a helicopter on the pirate radio station Q102.

Lynes & Lynes auctioneers in Carrigtwohill, Co Cork had “an extremely busy auction” last Sunday (March 11th) when 98 per cent of the almost 500 lots sold – including the contents of Charleston House, Midleton – home of the late Senator Trevor West, a former professor of mathematics at Trinity College Dublin.

But there was less activity than usual at John Weldon Auctioneers monthly sale of jewellery and silver in Temple Bar, Dublin on Tuesday (March 13th) where 54 per cent of 300 lots sold.

Housebuilder Glenveagh to build 2,650 more homes than planned
What sold for €437k and less in Dún Laoghaire, Artane and Drumcondra
A new branch and a new broom at Lisney
Iput progresses plans for apartments in Georgian buildings at Wilton Place
Tipperary land holding of 800 acres seeking €11m

Yes, having ‘just’ the one child can make for a wonderful family dynamic
10