‘God Save the Queen’ clock winds up in Co Roscommon 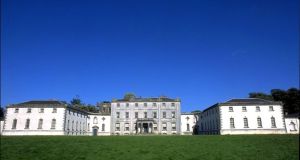 Strokestown Park House, the new home of the clock 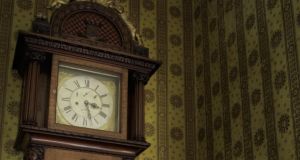 The clock, which is more than 9ft tall, plays ‘God Save the Queen’ and other tunes not yet identified

A grandfather clock that plays God Save the Queen when wound up has been acquired by Strokestown Park, the country house and tourist attraction in Co Roscommon.

The antique mahogany clock sold for €115,000 at Fonsie Mealy Auctioneers last year. At the time, the buyer was not named. But Jim Callery, a Co Roscommon businessman and philanthropist, has now confirmed that he bought the clock for Strokestown Park House, a Georgian Palladian mansion in the village of Strokestown which also houses the Irish National Famine Museum.

The clock was acquired with financial support from the international investment bank Investec, which has operations in Ireland, and goes on public display from today.

Known as the “Speaker’s Clock” and, informally, as “Ireland’s Big Ben”, it was once, reputedly, part of the furnishings in the old Irish Parliament on College Green in Dublin.

It was previously owned by a private collector who had loaned it to the Houses of the Oireachtas in 2007. The “monumental” clock, which stands more than 9ft tall, was on display in the lobby of Leinster House where it reputedly suffered damage because hot air from the heating system caused the glue to melt. The clock was taken away for repairs and never returned. There was speculation that the State might purchase the clock but that deal never materialised, probably due to the economic crash.

As well as keeping time, the clock is fitted with a wind-up mechanical device that, when activated, plays the British national anthem and four other 18th-century tunes. Callery said the clock had been undergoing repair since he acquired it at auction last year.

A leading English horologist, André Dawkin, has made more than a dozen visits to Strokestown to work on the clock which he described as “beautifully made, exceptionally large and designed to make an impression”. He said he had never before had to go up on a ladder to repair a grandfather clock. He said the other tunes played by the clock had yet to be identified.

In 1847, Denis Mahon, who was then the owner of Strokestown Park, was the first landlord to be assassinated during the Famine period. The archive revealed that many of the impoverished tenants on the Strokestown estate were forced to emigrate to Canada on the so-called “coffin ships”. In 2000, Callery sponsored the building of a monument in their memory – a Celtic cross, hewn from blue limestone, erected on Rue McMahon in Quebec. The inscription reads: “To the people of Quebec from the people of Ireland: In remembrance of their selfless compassion in times of need.”

Strokestown Park is managed by the Irish Heritage Trust and attracts some 50,000 visitors a year. According to general manager John O’Driscoll, the estate currently receives “no public funding” and is “entirely supported by private philanthropy” from Callery, the Westward Garage Group and Investec. He said Strokestown was becoming a “a place of international significance in terms of Famine, diaspora [and] Irish history” and has “enormous potential to boost tourism, rural regeneration and community development”.

Michael Cullen, chief executive of Investec Ireland, which employs more than 240 people, said the company had been contributing to the funding of Strokestown Park over the past five years and described it as a “a unique heritage asset”.

Pollan is unique to Ireland so why don’t we eat more of it?
4